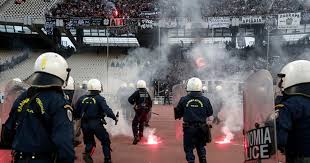 May 14 – Despite the Greek authorities going to extraordinary lengths to maintain order by flying in a Spanish referee to take charge of last weekend’s domestic cup final, a season of unprecedented turmoil was capped by yet more trouble – on and off the pitch.

PAOK finished the match with nine men and AEK Athens with ten while fans from both teams clashed with police outside the Olympic stadium and within as riots broke out.

Incredibly Hellenic Football Federation (EPO) President Vangelis Grammenos in a statement described the chaos as a “cleansing” of Greek football and that the AEK-PAOK Final Cup was a “won wager” – basically that the risk of the fixture was outweighed by the outcome.

But the outcome were scenes of extreme violence that left at least one fan stabbed, numerous fans with head injuries and barely controllable fighting between fans and police. At least 14 arrests made and eight police officers injured as tear gas was used to keep the fans apart.

Grammenos, in position in no small part through the support of PAOK’s controversial owner Ivan Savvidis, lamely passed off the chaos saying there were “certain problems before the match, but which otherwise was worthy of the institution”, going on to say it marked a symbolic day for Greek football.

Inside the ground, immediately after PAOK took their winning 2-0 lead, the crowd became uncontrollable with AEK fans charging police and the in-gr website describing “the bleachers of the stadium resembling a war zone for five minutes. At the same time, PAOK supporters, instead of celebrating that their team won the cup, decided to start a new circle of clashes with riot police (MAT). That resulted in the firing of at least five flares” directly at the pitch.

Spaniard David Borbalan was picked to referee the game, and some 5,000 officers appointed to try and safeguard the game, a repeat of last year’s final.

The cup final marked an extraordinary a year for Greek football chaos in a country that had already set the bar for political infighting and entrenched factions. FIFA and UEFA have floundered hopelessly in the market, seemingly caught up by their own political requirements or perhaps the naïve belief that commonsense might prevail.

A league match between the teams in March was abandoned after PAOK’s Russian-Greek owner Savvidis entered the pitch bearing a sidearm, to threaten the referee. Both he and the club were sanctioned while the league was briefly suspended amid a warning from FIFA to the Greeks to get their house in order or risk being handed an international ban.

Perhaps the best thing that can be said about this season Greek football is that it is over.