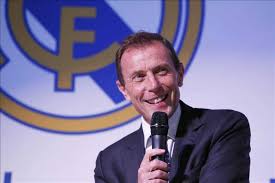 May 15 – It has been a quiet week so far in terms of news regarding FIFA president Gianni Infantino’s frantic lobbying to get backers for his $25 billion sell off plan for new FIFA endorsed Club World Cup and Nations League competitions. But he has received support from one area.

Emilio Butragueno, Real Madrid’s director of institutional relations, said at the weekend that the club would be in favour of a 24-team Club World Cup from 2021.

“We think that for fans it could be a very interesting competition,” Butragueno said on Real Madrid TV.

“Honestly, we think it could be a very attractive competition. We are talking about the best European teams and from other continents.”

He went on to say that Real Madrid were not the only one of Europe’s giant clubs to like the idea. “We think that for fans it’s very interesting, it’s how we see it and other important clubs in Europe, who are also keen on the possibility, see it.”

Infantino or his representatives are understood to have met with Real Madrid, Barcelona, Bayern Munich, Manchester City, Manchester United, Arsenal, PSG and Juventus to discuss the plan.

The offer to clubs is that they would collectively receive $1.5 billion per competition for a tournament taking place over three weekends in June or July. Of the 24 teams taking part, 12 would be from Europe which includes the last four Champions League winners, there would be five teams from South America and two each from Africa, Asia and North America with Oceania offering a sole entrant.

The 24 teams would then be divided into eight groups of three teams, the group winner progresses to the next round, each team would play a minimum of two matches each and a maximum of five.

If it is a purely financial decision, then for the European clubs the issue is whether they are damaging their own Champions League and Summer tour income streams.

The European clubs, many owned by non-domestic and non-traditional football market investors, are likely to have less concern about the integrity of their current competitions and will likely have a strong inclination to follow the FIFA cash promise (though ask the current FIFA member federations how far FIFA has delivered on its last cash promise).

Real Madrid, who are owned by their club members, play in a league where they can flex their dominant cash position to pretty much sleepwalk into a top two finish, likely guaranteeing their qualification for a Club World Cup every time under the FIFA proposals.

They have won the last two Club World Cups barely breaking into a sweat, treating the competition more like a mid-season warm weather break than a competitive event that requires full concentration.

Which of course raises questions about the potential competitiveness of a 24 team Club World Cup. Ultimately it looks like it would just be a cut down summer Champions League competition for 12 lucky European giants with a big payout for this privileged few. It would likely be the closest you can get to free money possible

There needs to be a lot more convincing around the sporting integrity of this competition proposal and FIFA needs to take a harder look at itself and its own mission objectives in terms of expanding the game globally rather than myopically focussing on funding an elite few. But if you are one of those guaranteed a position in that elite few then it looks like a pretty easy pay day – at least in the short term and reading the ‘back of envelope’ calculations floated out to clubs to date.