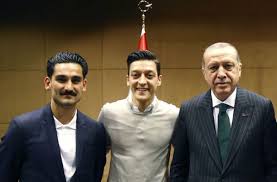 May 15 – British-based German internationals Mesut Ozil and Ilkay Gundogan, both of Turkish origin, have been lambasted by their national federation and German politicians for posing for photos with Turkey’s controversial President Recep Tayyip Erdogan.

During a meeting Sunday with Erdogan, the two players, both born in the German city of Gelsenkirchen, handed over signed Arsenal and Manchester City shirts to the 64-year-old, who has served as President of Turkey since 2014 having previously been Prime Minister since 2003.

Erdogan, who was in the UK as part of a state visit, is in the midst of a re-election campaign after he declared snap elections and photos of the meeting were used on social media by his campaign team, much to the annoyance of the German FA.

“The DFB of course respects the special situation for our players with migrant backgrounds, but football and the DFB stands for values that Mr Erdogan does not sufficiently respect,” DFB president Reinhard Grindel tweeted. “That’s why it’s not good that international players allow themselves to be manipulated for his electoral campaign.

“In doing that, our players have certainly not helped the DFB’s work on integration.”

Gundogan insisted he didn’t want to make a political statement. “As German internationals we adhere to the values upheld by the DFB and we are aware of our responsibilities,” he said.

But German right-wing politician Beatrix von Storch asked why Gundogan was playing for the German national team “when he recognises Erdogan as his president?” while Cem Ozdemir, former leader of the German Green party and himself of Turkish origin, was also scathing.

“The president of an international German footballer is called Frank-Walter Steinmeier, his chancellor Angela Merkel and his parliament the Bundestag, the headquarters of which are in Berlin and not Ankara,” Ozdemir told SID.

Erdogan’s regime has been condemned by human rights campaigners and German national team manager Oliver Bierhoff said he would raise the issue with the players.

“I have no doubts over the desire of either Mesut or Ilkay to play for Germany and identify with our values,” said Bierhoff. “Neither one of them was aware of the symbolic value of this photo, but it’s clearly not right and we’ll be talking to them about it.”

Turkey, who have not qualified for the World Cup, are vying with Germany to stage the 2024 European Championships but Yardmici said it wasn’t right for German players of Turkish origin to feature in any promotional material.

“I don’t think we should involve them, they are Turkish but are playing for another national team. We should not involve them in our campaign,” he told a meeting briefing in London.

Asked about the photo, he added: “Our president Erdogan is visiting England and was an active footballer and he loves meeting Turkish football players especially, although he does meet foreign players in Turkey when he has the time.

“That is one of the reasons he met them yesterday (Sunday), to ask them how many goals they scored etc, it was football chatting but I have to make it clear they are not part of our campaign and there is no intention of bringing them into our campaign.”