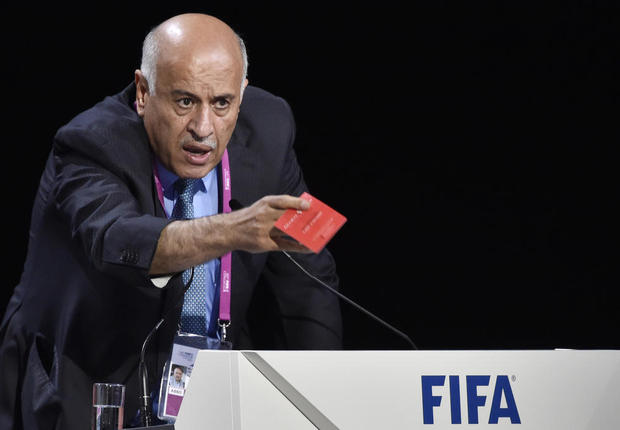 June 15 – Palestinian football has suffered a second off-the-field blow in a matter of days after FIFA announced it is taking disciplinary action against Jibril Rajoub (pictured), the federation’s tub-thumping leader, for threatening Lionel Messi.

Last month Rajoub called on fans to burn pictures and shirts of the Argentine superstar if he played in a friendly against Israel in Jerusalem.

The match was originally scheduled for Haifa but Palestinian sympathisers were infuriated by Israel’s provocative decision to switch it to disputed Jerusalem and, specifically, to the Teddy Kollek Stadium which is built on land that, according to Palestinians, was a village destroyed in 1948.

Messi, Rajoub said at a June 3 press conference, “has tens of millions of fans in the Arab and Muslim countries… we ask everyone to burn their shirts which bear his name and posters.”

The World Cup warm-up eventually never took place when it was called off by Argentina’s own federation despite an appeal from Israeli Prime Minister Benjamin Netanyahu to his opposite number Mauricio Macri.

Palestinians claim the eastern part of Jerusalem, annexed by Israel, as the capital of their future state. Israel considers the entire city its own. In a statement FIFA said its decision “came as a result of his (Rajoub’s) statements, widely reported in the media, with respect to the international friendly match that was scheduled to take place on 9 June 2018 between Israel and Argentina.”

Rajoub’s highly inflammatory comments may well have contributed to a crushing defeat for the Palestinian Football Association (PFA) chairman and his allies at this week’s FIFA Congress when delegates comprehensively threw out a proposal to amend article 3 of the FIFA statutes relating to human rights.

The PFA-led proposal called for the relevant statute to be hardened up to include sanctions. But the motion, which called for human rights violations to be “punishable by suspension or expulsion” was rejected by 156 votes to 35 after Congress was told that similar sections are already included in their rules, and that therefore the PFA’s arguments were extraneous.

The motion was the latest attempt by an increasingly frustrated PFA to force FIFA into taking action against Israel for perceived injustices in the occupied territories. But after the move was voted down, Israel’s football boss Ofer Eini inevitably got in on the act.
“The ritual repeats itself every time, when Rajoub tries to lead decisions at FIFA against our soccer and the State of Israel,” Eini said.

“Thanks to correct and intelligent work we are succeeding to explain to our friends in FIFA what truly hides behind the supposedly innocent proposals of someone who has crossed every red line.”

Palestinian legal advisers say they will now go to the Court of Arbitration for Sport but Israeli Sports and Culture Minister Miri Regev, who ordered the game to be transferred to Jerusalem, said she felt vindicated by FIFA’s move.