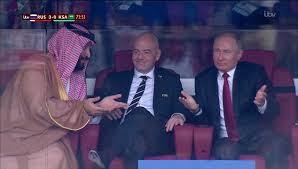 June 18 – The pictures flashed around the world of FIFA president Gianni Infantino sitting majestically between his two new best friends, the Crown Prince of Saudi Arabia on his right and Valdimir Putin on his left at the opening match of the 2018 World Cup, will have left FIFA’s high paying rightsholders wondering if there is another game in play that they are not part of.

Saudi-backed broadcaster satellite beoutQ, which has been transmitting via the Arabasat satellite, has been stealing sports rights content on an industrial scale.

That now includes every game so far of the FIFA World Cup from Russia, a copyright issue FIFA seems to be tacitly tolerating despite a statement saying it “takes infringements of its intellectual property very seriously and is exploring all options to stop the infringement of its rights, including in relation to action against legitimate organisations that are seen to support such illegal activities.”

The issue for Infantino is that the piracy is not just that of a rogue satellite operator, but of a state-supported broadcaster deliberately stealing rights to undermine a neighbour in a sports rights war that has become part of a wider geo-political agenda.

A further complicated for Infantino is that he still has his eyes on a $25 billion infusion of new money for the commercial rights to a revamped Club World Cup and a world Nations League – a proposal he failed to bully through prior to the World Cup but which is still on the agenda.

While Infantino has been coy about the origin of that money, all indications are that the bulk of it is coming from Saudi Arabia. It is a sum of money that most rights brokers believe is not attainable in the current rights markets, which would again point to a soft geo-political power play in the disruption of the global football calendar and the run-up to the Qatar 2022 World Cup.

beoutQ launched soon after the Qatar blockade began, in August 2017. Claiming that it is a Colombian and Cuban venture, investigations have shown it is linked to Saudi companies and is actively promoted by Saud Al Qahtani, a media advisor to the Saudi Royal Court, holding the rank of Minister.

BeoutQ’s channels are broadcast using satellite frequencies on Arabsat, an intergovernmental satellite operator headquartered in Riyadh and 36.6% owned by the givernment. Since December 2017, beIN has repeatedly requested Arabsat to stop beoutQ’s illegal transmission of beIN’s bought and paid-for media content via Arabsat’s satellites. Arabsat has refused to cooperate, despite repeated cease and desist letters.

Tom Keaveny, managing director of beIN MENA, said: “Our investigations have revealed that beoutQ is connected with Saudi Selevision Company, a media company owned by a well-known Saudi family, the Khusheims.”

It is not just beIN that has had its broadcasts pirated. As beIN has taken anti-piracy measures to prevent the theft of its signal, beoutQ has turned to stealing broadcast feeds from other rightsholders and beaming the matches to a footprint it hasn’t paid a rights fee for.

Most recently it has stolen from Comcast, taking NBCUniversal Telemundo’s World Cup feed of the World Cup and inserting their own commentary on top.

In a statement release last Friday FIFA said: “FIFA is aware that a pirate channel named BeoutQ has illegally distributed the opening matches of 2018 FIFA World Cup™ in the MENA region. FIFA takes infringements of its intellectual property very seriously and is exploring all options to stop the infringement of its rights, including in relation to action against legitimate organisations that are seen to support such illegal activities. We refute that BeoutQ has received any rights from FIFA to broadcast any FIFA event.”

The warnings from FIFA and the Confederation of African football over the pirating of their competitions, have fallen on deaf ears in Saudi Arabia.

A beoutQ statement issued at the weekend said: “Our dear viewers, beoutQ informing its viewers that it is carrying out regular maintenance for its channels, resulting from the desperate attempt led by the qatari side represented by its sports group affecting its Cuban satellite today and yesterday through illegal and failed means which we thwarted. These attempts contravenes with international law. We declare this and comfort our viewers that their viewing of the World Cup is in safe hands, and we request the viewers to keep their boxes on all the time on our channels l, connected to internet until the next match so that we can carry out the needed updates in the coming hours to resume broadcast gradually.”

Talk is cheap, but rights are expensive. With more than 10 games of the 64 game World Cup already pirated, FIFA could very soon be facing aggressive demands for rightsholders for action rather than platitudes. For an organisation that last week trumpeted its sound financial footing and made promises of even more money to its members, it is showing very little respect or protection for the buyers of those rights. This could also lead to demands for compensation. Then Infantino might have to pluck up courage to have a word with his pal sitting on his right hand side.