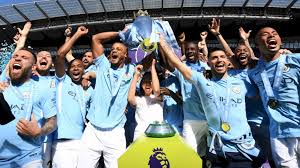 July 3 – With many European clubs back in training and looking towards pre-season marketing/training trips to foreign countries, Manchester City have announced that their two trophies – from their Premier League and Carabao Cup wins last season – will also be making a summer tour.

It is a tour with a difference though as fans will get the chance to vote for where the trophies will visit.

The Centurions Trophy Tour, presented by Etihad Airways, will visit 15 cities across the coming weeks and kicked off in Abu Dhabi today.

The tour will showcase the record-breaking ‘Centurions’ season which saw the team reach 100 points in its Premier League campaign. In each of the tour destinations there will be a series of fan events and match screenings as well as visits to the Club’s community projects.

The tour will visit cities across China, the United States, South America and south-east Asia. Fans can nominate their locations for the tour to visit on the club’s Cityzens membership platform.

Omar Berrada, Chief Operating Officer at Manchester City, said: “We wanted to make sure that our fans were at the heart of all of the celebrations and this tour is extra special as fans will get the chance to decide where the trophies visit. We have some exciting plans to create great City experiences for fans on every stop of the tour and bring them closer than ever to the Club they love.”