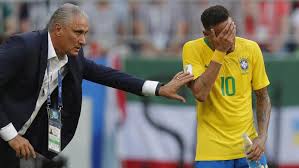 July 9 – The Brazilian FA (CBF) wants to maintain Tite as head coach of the Brazilian national team until the 2022 World Cup in Qatar even though Brazil crashed out of the World Cup at the quarter-final stage following a 2-1 defeat against Belgium.

In Kazan, Brazil’s World Cup dream ended cruelly in the last eight at the hands of Belgium. The five-times world champions conceded two first-half goals and never recovered, even though they dominated after the break. For Tite, it was only his second defeat in 26 matches at the helm of Brazil. He succeeded Carlos Dunga in 2016 and guided Brazil to a comfortable World Cup qualification.

The surprise defeat has not deterred the CBF and, according to local media reports, the governing body has offered Tite a contract extension until the 2022 when Qatar will host the next World Cup.

Tite has taken holidays and is said to be considering the offer. In the past only two other Brazilian coaches have stayed on after World Cup tournaments: Mario Zagallo remained head coach after Brazil’s 1970 World Cup win and Claudio Coutinho was maintained after the 1978 World Cup in Argentina.

Talks about a contract extension had begun before the World Cup, but on Saturday, the day after Brazil’s exit, Rogerio Caboclo extended an official offer to Tite. Caboclo will become the CBF’s new president next year following his election victory in April.

Tite’s good results have reduced the intense scrutiny on the CBF, a corruption-ridden entity, whose two former presidents have fallen from grace. Jose Maria Marin is imprisoned in the United States and Marco Polo Del Nero has been banned from football for life. In those circumstances, Tite has always been able to work without much interference from the top.