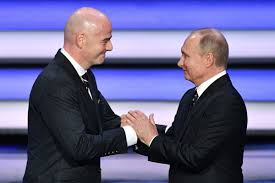 July 10 – Whether Russian football will revert to its pre-World Cup domestic issues of racism and fan violence once the tournament is over remains to be seen. But for the last four weeks the country has bent over backwards to be as welcoming and accommodating to the thousands of foreign visitors attending games.

The praise heaped on the Russian authorities by fans and media alike has been music to the ears of both FIFA boss Gianni Infantino and Russian president Vladimir Putin, with most of the negative stereotypes about the country pushed aside amid a carnival atmosphere inside and outside stadiums.

“We all fell in love with Russia,” Infantino told a smiling Putin at  recent  televised meeting in the Kremlin. “Everyone who has been here for a period of time now has discovered a country that we didn’t know.”

Despite increasing tensions with the West, Putin has presided over a superbly organised, relaxed and colourful tournament though this does not fool human rights groups who have consistently cautioned he is using the tournament to gloss over his authoritarian rule.

Human Rights Watch said the World Cup was taking place “during the worst human rights crisis in Russia since the Soviet era.”

“Russia has become a true football country. The virus of football has entered into the bodies of each and every Russian citizen,” Infantino said.  “All the fears that some were trying to put on us with regards to this World Cup, well not only they were not true but it’s actually the opposite.”