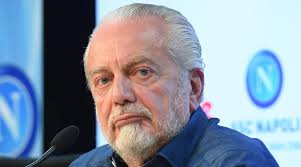 Sarri has taken charge of Chelsea after three seasons at Napoli and has already taken highly rated midfielder Jorginho with him.

While that transfer was sanctioned after discussions with Napoli’s new manager Carlo Ancelotti, de Laurentiis accused Sarri of trying to take more of Napoli’s players.

“He wanted to take my whole team to England and dismantle it. I had to lay down the law to Marina [Granovskaia, Chelsea director],” De Laurentiis told Sky Sports Italia.

Sarri led Napoli to two second-place finishes in his three seasons, and De Laurentiis took exception to the 59-year-old’s take on their parting.

“I didn’t like it when he said that we both made mistakes,” said De Laurentiis. “I don’t think I made any.”