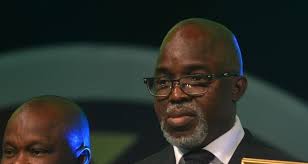 July 24 – After months of political in-fighting and with the threat of a FIFA ban hanging over the country, Nigeria has spectacularly restored Amaju Pinnick as its federation president.

Earlier this month, Chris Giwa, founder of a rival faction in the NFF, seized control insisting he was elected president in a disputed vote back in August 2014 following a court ruling. However, FIFA recognises Pinnick as the Federation’s chief and Gianni Infantino warned the Nigerian authorities to expect a ban if they do not comply with the regulations over government inference.

Pinnick also has the backing of the Confederation of African Football (CAF) having just been named CAF’s first vice president to replace Ghana’s Kwesi Nyantakyi who was forced to step down over alleged bribery.

Nigeria’s minister  Sports, Solomon Dalung, had originally ordered that the NFF should comply with the Supreme Court judgment but now the Nigerian authorities have backed down and ruled that Pinnick should return to office.

Local reports said the Department of State Service ordered Giwa’s faction to leave the NFF’s headquarters after their brief reign in charge.

The Pinnick-led board of the Nigeria Football Federation (NFF) thanked Nigerian President  Muhammadu Buhari for “intervening in the NFF crisis”.

“By this single action, our President has restored hope to millions of Nigerian youth and the not-so-young who are involved in one way or the other in the football business. Now they can live and breathe their favourite game once more.”

Pinnick urged Nigerian football stakeholders to work for the overall progress of the country’s football. “Football is about people, about unity. The game belongs to the fans and the pride belongs to the nation,” he said. “The people are deprived when football is inhibited but with the action of the President, Nigerians can now enjoy what they love most.”

Last week, the resumption of Nigeria’s domestic league was postponed indefinitely amid the leadership crisis that caused total gridlock with a FIFA ban imminent.

“All plans and programmes of the various National Teams will proceed accordingly, and we also believe the League Management Company will now put arrangements in place for the resumption of the Nigeria Professional Football League,” NFF General Secretary, Mohammed Sanusi was quoted as saying.