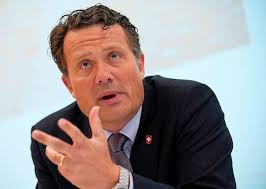 August 13 – Alex Miescher has been forced to quit as general secretary of the Swiss football federation as a result of controversial comments he made about Swiss players having dual nationality.

After Fifa sanctioned  Granit Xhaka and teammate Xherdan Shaqiri, both of whom have Kosovo-Albanian backgrounds, for celebrating World Cup goals in Russia with a hand gesture representing the “double eagle” of the Albanian flag, the debate reached new levels of controversy when Miescher suggested there was a need for tighter regulations and that creating dual nationalities also creates problems.

Around two thirds of the Swiss national team have a foreign background and Xhaka described Mieschler’s remarks as “Stone Age commentary”.

Five weeks after making the remarks, Mieschler, who took on the role nine years ago when Peter Gilliéron moved to become Swiss FA president, has stepped down, his position deemed untenable.

In a statement released by the Swiss federation Miescher said he felt privileged to have held the post but added there had been “misunderstandings and communication errors”. The federation said it “regrets the decision of its general secretary but understands it”.

Back in 2016, Switzerland, which has long had ethnic Kosovo players in its national team, opposed admitting Kosovo as a UEFA member. “It is unfair to put pressure on players,” Miescher said at the time. “They will not have to choose for a country, but against one. There’s an issue for us in Switzerland about the status of the players. We don’t know whether they will be able to choose who to play for.”