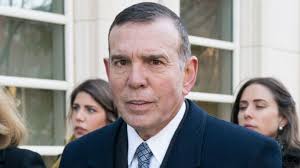 August 30 – Six months after being found guilty, Juan Angel Napout (pictured), one of the biggest scalps in the sprawling FifaGate corruption scandal that brought the organisation to its knees, has been jailed for nine years in the latest get-tough sentence handed down by US justice authorities.

The former high-flying Paraguayan vice-president of FIFA and head of Conmebol was convicted of racketeering conspiracy and two wire fraud charges in the US-led investigation into widespread corruption. He will also have to forfeit $3.37 million and pay a fine of $1 million.

The verdict, delivered on Wednesday at a federal court in New York, followed the four-year sentence meted out last week to one of Napout’s partners in crime, former Brazil Football Confederation chief Jose Maria Marin.

Napout, who was also president of the Paraguayan FA, was arrested at the Baur au Lac in Zurich in December 2015, seven months after the infamous initial dawn raid at the same hotel in which the so-called ‘Zurich Seven’ were also detained.

His crimes related to pocketing millions of dollars in bribes in exchange for media and marketing rights to various football tournaments.

According to agency reports, Napout, who portrayed himself publicly as one of the good guys in favour of reform, appeared stoic throughout a five-hour hearing in a Brooklyn courtroom, even when his wife begged for mercy. In an emotional appeal, she pleaded in tears: “With all his flaws and strengths he is a decent man. Please, your honour, give mercy and impose a sentence that allows him to return,” to Paraguay.

When it was his turn to speak, Napout, who had spent the two years before his trial under house arrest in Florida, apparently kept it brief.

“I know America is a compassionate country,” he told U.S. District Judge Pamela Chen. “I just ask for your compassion.”

But he couldn’t avoid a lengthy jail term and although Chen took the view that the prosecutors’ demand for 20 years was excessive, she said she had difficulty reconciling his public persona as a generous man of good character with his “hidden life” spent enriching himself from a sport he professed to love.

“Napout had a public face, one that is reflected in all the letters I’ve seen,” Chen said. “But then there was this hidden character he had, this hidden life. A message has to be sent to others. You cannot steal millions in bribes from these organisations and go unpunished.”

At his trial and that of others, prosecutors cited a nefarious scheme by which powerful football officials from across the globe took massive bribes in exchange for awarding marketing rights to major s tournaments without going through an open bidding process.

By the time Napout was arrested in Switzerland, he had accumulated well over $3 million in exchange for his support of marketing contracts for the Copa América, Copa Libertadores and World Cup qualifying tournaments, and had agreed to receive more than $20 million more, prosecutors said in court papers.

Napout, 60, had presented himself in public as someone “who would root out corruption, all the while taking bribes,” the judge said, adding that his wealthy background made his greed all the more baffling.

After the hearing, U.S. Attorney Richard Donoghue said that Napout “rose to the highest ranks of soccer only to turn his back on the institutions and people he was entrusted to serve.”

“Napout’s conviction, as well as the successful prosecution of other high-level soccer officials, has struck at the core of corruption in soccer and underscores the need for continued vigilance against fraud and bribery in the sport.”

Napout’s lawyers said they would appeal.

“Of course we are disappointed with the nine-year sentence and plan to appeal both the verdict and sentence,” Silvia Pinera-Vazquez, Napout’s lawyer, said in an emailed statement.