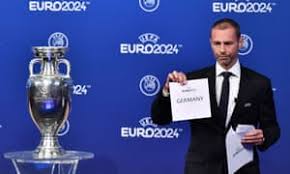 Like UEFA president Alexander Ceferin or not, he has shown a steady hand running UEFA since he took over from – who was it again? Time flies, doesn’t it… The ‘man who came in from the nowhere’ and took charge of Europe’s football confederation has been accused of a lot of things since he took office. Most of them have had about as much basis as a Döner Kebab without lamb and onion.

Turkey have battled, fought and lost their bid for Euro 24. Again. Last time, they lost against the French bid. This time, against Germany of all countries. The only consoling point is that there are more citizens of Turkish descent in Germany than anywhere else in Europe. At least those few million will enjoy the 2024 Euros up close and personal. If Turkey qualify, as they should.

As for the Turkish bid itself, the accusations against Ceferin personally are all but asinine, if not malicious. They are about as logical as Kavanaugh having been a teetotalling altar boy and not a dysfunctional drunk. And what is truly hitting it out of the ball park is Yeni Safak’s headline which said: ‘UEFA gave its support to racism’. Now that is not asinine, it is plain idiotic.

I have met a lot of racists in Europe, and in European football. Many are happily sitting on their fat asses in xenophobic enclaves of Europe’s East and had little concept of democracy until 1989: not that what they deliver today is anything that would come close to what some of us would call a civilised society.

To claim that Ceferin’s UEFA supports racism (as a whole) is unacceptable. Especially when it comes from the crevices of a country that has a proud history itself of rampant racism to this day. Turkey lost their bid again, and that’s that.

Last time round, when the French won and Turkey lost by the tiniest of margins (then, the margin was 5-foot-something tall and hailed from Sheffield), they were quite right to complain about interference and political manoeuvring. With President Gul in the antechambers and Sarkozy shaking hands with every single ExCo Member inside the room – dragged around by Platini who should not have intervened nor disrespected Turkey’s President – then Turkey was right to complain, to be outraged and insulted.

But not now. Not this time.

This time, the promoters of the bid have squarely lost (unlike last time when one English vote was turned at the last minute). And they lost not because of some imaginary racism or some fabulous conspiracy.

They lost because of the way Europe is today. It is a massive risk to give Europe’s prime football tournament to a country that is at war with itself and one that cannot be considered to be a haven of peace and serene calm. Sadly, many Turks, if not most, are fabulous people. They live in a country that has been the core of culture throughout the hemisphere and beyond, and had an influence for hundreds of years. Some of the most cordial and hospitable people I have ever met are Turkish people, who take pride in their history (as they should) and whose culture is spectacular, colourful and the envy of many. Some of the best food – and certainly the best lamb anywhere – is served in the most international cities of them all, Istanbul. Turkey’s seaside resorts are amazing, its hinterland more picturesque than many places I have visited.

But there is a reality that reigns right now, and has reigned for a number years: there is uncertainty, there is disquiet and there is dissatisfaction. Much of it is home-made, even if some of it is definitely imported from abroad.

There is nothing wrong with Turkish people, but at present, there is a lot wrong with Turkey that must be considered, when such decisions are taken. Decisions that weigh heavily on issues like security and freedom of movement, freedom of expression, freedom of speech. The Turkish citizens who wanted to host the Euros would have deserved the nod: their country has the infrastructure, it has the stadia and hotels galore. What it doesn’t have is the security that is required, and that’s what Germany does have (perhaps even too much of it).

So Turkey lost the bid. Again. Move on and forget it. At least this time they were not conned out of a winning bid, unlike like last time when the French machine ran them over in no uncertain way. This time, the politics and security aspects were the cause of the loss, not a conspiracy against the country. And before Turkish media start throwing around the racism card, beware. Don’t throw stones that can easily damage the glasshouse in which you sit. Deal with it and move on. Show the class of the educated men and woman your country produced for centuries. And don’t descend into the crevices of populism, even if it is the political flavour of the day. A very sick day in Europe, and beyond.