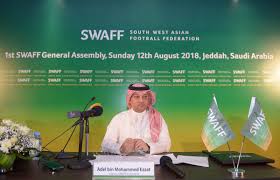 October 30 – The fledgling South-West Asian Football Federation (SWAFF), a breakaway group of federations created by the Saudi Arabians, has been cut in half with Bangladesh, India, Nepal, Bhutan, Maldives, Sri Lanka and Pakistan all deciding to leave with immediate effect.

The decision was taken at a meeting in Kuala Lumpur today (Tuesday) a day before the Asian Football Confederation holds its congress.

SWAFF was only formed this May in Saudi Arabia and was a blatant attempt by the Saudis to drive a geo-political wedge into football politics by forming a group that excluded Qatar and Iran. To fall apart so quickly is a significant blow to the Saudis who are desperate to find football supporters for their geo-political position in the region.

The withdrawal of seven nations is also major blow for Ezzat and his credibility as a presidential candidate for the whole region. His candidacy and independence was already in question over the exclusion of neighbours Qatar and Iran from SWAFF as a fundamental tenet of any presidency is to represent all member equally. Clearly that would never be a priority for Ezzat, indeed his focus would likely be the geo-political opposite as Saudi desperately seeks to find football friends that will support their national objectives.

The AFC Congress was set to officially recognise the SWAFF grouping but that must now be in question as something of a pointless exercise. The member federations remaining in SWAFF are already part of the West Asia grouping and to recognise SWAFF just for the purpose of excluding Qatar and Iran would be an unacceptable act of discrimination and one the AFC’s members are unlikely to want to be associated with.

For Ezzat, who is new to football politics having only been head of the Saudi Arabian FA for less than a year before chasing his wider regional ambition (for himself and his country), the SWAFF shambles will be a reminder that the AFC crown will be a hard one to win.

Saudi Arabia is currently seen as a bad actor on the global sports scene with its support of pirate broadcaster BeoutQ that has stolen TV broadcasts to pretty much all the world’s major events including every match of the FIFA World Cup and the Champions League. Those rights are held by Qatari broadcaster beINsport. This is increasingly threatening to de-stabilise the broadcast rights market and the football economy in particular as confidence that rights owners can and will protect their properties from broadcast piracy wanes.

For Saudi and its football ambition, the refusal to act to help protect rights and football’s income stream is another significant black mark against their ambition for Ezzat and one that is increasingly a major concern across the region which has seen its own competitions grow in stature and rights income in recent years.