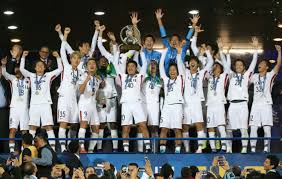 November 13 – Kashima Antlers were crowned AFC Champions League winners for the first time after a goalless stalemate with Iran’s Persepolis at the Azadi Stadium on Saturday saw the Japanese side wrap up a 2-0 aggregate scoreline following their first leg victory last week.

A stalwart rearguard action from the visitors frustrated their hosts and the bulk of the 100,000 supporters who had crammed themselves into the cavernous venue in Tehran, with Persepolis unable to reduce Kashima’s two-goal advantage.

Of the few chances that did fall Persepolis’ way, the majority came to striker Ali Alipour, but he was unable to make them count, as Go Oiwa’s side secured the 0-0 draw to make it back-to-back Asian champions from the J.League after Urawa Red Diamonds’ triumph last year.

The victory sees Kashima, who claimed the richest-ever purse prize of $4 million, become the third side from Japan, Urawa and Gamba Osaka, to lift the continental crown.

Commenting on Kashima’s success, AFC President Shaikh Salman bin Ebrahim Al Khalifa said: “I salute the remarkable success of Kashima Antlers on winning their first AFC Champions League title. It is rewarding to see them join the list of worthy champions who have triumphed in Asia’s leading club competition.

“Persepolis deserve our praise for putting on a superb performance which captured the imagination of football fans from around the world.

“The world remembers fondly the remarkable display by Kashima against the mighty Real Madrid in the final two years ago and I’m confident Kashima will carry their winning momentum to the 2018 FIFA Club World Cup and strive to do Asia proud once again in the UAE.”