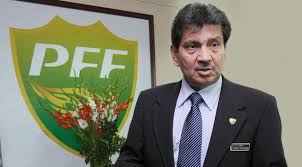 January 7 – The Asian Football Confederation’s (AFC) executive committee has condemned third-party interference in running of the affairs of the Pakistan Football Federation (PFF) and has promised its support to ousted PFF president Faisal Saleh Hyatt (pictured).

Hayat, who is an AFC exco member, was recently removed as PFF president by order of the country’s Supreme Court and replaced by Syed Ashiq Hussain.

FIFA refuses to acknowledge the court-ordered election and has threatened the Pakistan Football Federation with suspension.

The AFC said in a statement it, too, was backing the “legitimately elected” federation and its chief.

FIFA only lifted a six-month ban on the PFF in March 2018 after the Lahore High Court ordered the handover of control of the PFF from a court-appointed administrator back to the winner of the presidential election held 20 June 2015 – Faisal Saleh Hayat. The 2015 elections were hugely controversial and the infighting effectively put Pakistani football into freefall.

Pakistan’s assimilation back into the football family was pretty quick with the South Asian Football Federation approving Pakistan as the host of the SAFF Championship in 2020 in April last year.

Last September FIFA extended the mandate of the current Pakistan Football Federation (PFF) administration until March 2020, but with the requirement to organise fresh elections, bringing the PFF statutes in line with the FIFA statutes.

Hayat had been given an extension of his term as president by FIFA until June 2019 and a deadline of a further nine months to hold elections.

The AFC executive committee also confirmed that the confederation was working with FIFA following widespread allegations of sexual abuse of female players in Afghanistan and re-iterated the determination to provide a safe environment for all footballers, especially female and young players.

“We will look to provide an easy pathway for players to report such abuse anonymously — in a way that people can report breaches of integrity — so that we can guarantee a safe environment.,” said AFC President Shaikh Salman Bin Ebrahim Al Khalifa. “The administration will work with stakeholders to establish the best way forward to make football even safer.”

Meanwhile the AFC’s five regional associations have asked the executive committee to consider an increase in the number of seats at its top table.