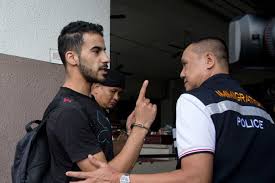 The alacrity of FIFA’s move to call on stakeholders to find a solution to the detention of part-time footballer Hakeem Al Araibi in Thailand shows a remarkable new found conscience and morality in an organisation that eschews a philosophy of never mixing politics and football.

But for this FIFA it is rarely about the football. It is always about the power, and the money that can bring. And in a small way Al Araibi’s arrest could be a big help along the road of the FIFA president’s power and money driven crusade.

Only a gentle scratching of the surface points to much murkier objectives behind the somewhat opportunistic PR call for Al Araibi’s return to Australia. It is a call that is as duplicitous as it is a show of heart-warming humanity. This is a FIFA that never does anything without an ulterior motive – the use of the Al Araibi case (as worthy as it might be) is (unfortunately for Al Araibi) purely a means to an end which has all the hallmarks of a classic new-FIFA manoeuvre to reinforce the powerbase of its president and his buddies.

A president who since installation in his Zurich tower has taken a sledgehammer to pretty much everything within the organisation from its ethics process (it doesn’t really have one now) to grant distribution (voting friends and family first) to proposals to sell off its core competition assets to vaguely unknown third parties and revamp the global international calendar in such a way that FIFA will inevitably eat everyone’s lunch.

Poor Hakeem – one has to question the wisdom of his deciding to travel to Thailand from a country where he has refugee status when there was an outstanding Interpol Red notice for his arrest – has really become just a handy pawn in a much bigger global play.

What FIFA has done is go into battle on a civil criminal case over the extradition of a person from one country to another who is accused (rightly or wrongly) of acts of terrorism. He was arrested while travelling on holiday, not as part of a football team, not on the way to a match or training, and not acting in any football capacity whatsoever. If he had been, then there would be a powerful case for football’s governing bodies to get involved.

So is FIFA’s new moral compass going to take up the mountains of other injustices committed on the world’s footballers.

FIFA’s involvement will bring renewed hope to hundreds of Palestinians who have been detained and arrested at the borders with Israel – many of them were travelling on legitimate football business, usually just trying to get to training or matches. Stand up Palestine president Jibril Rajoub, all might not be lost after all with this FIFA regime.

Can the 800+ British footballers caught in the film fund tax avoidance scam by unscrupulous banks, agents and financial advisors get FIFA help negotiating tax bills they can’t pay – after all, a lot of their agents were FIFA-licensed. Sadly there have been several suicides of former players facing the inability to pay.

Perhaps FIFA will now campaign for justice for the murdered Ghanaian journalist Ahmed Divela Hussein-Suale who was killed after a Ghanaian politician called for retribution against him for his part in the story that led to the downfall of Kwesi Nyantakyi, former Ghana Football Association president and a close supporter of FIFA president Infantino. Or perhaps not.

And then of course what about some of the injustices of the FBI case that brought down a raft of FIFA’s top brass and ushered in the new president. A hard look at the case of Costas Takkas will quickly show you that the 15 months he spent in solitary confinement in Switzerland and in prison in the US is harsh punishment for transferring money via his business account from Traffic Sports to former Concacaf president Jeff Webb’s personal account in the US.

A question of evidence

No-one can question the morality of the argument, on the evidence we have seen, that Bahrain should leave Al Araibi where he is in Australia. But no-one really knows what his involvement was in the protests in Bahrain – though probably not very great. Certainly there are other Bahraini players who were arrested for taking part in the protests who were released. They will tell you their freedom came with the help of the intervention of AFC President Shaikh Salman bin Ebrahim Al Khalifa – I know this because I spoke to a number of them two and a half years ago. There seems to be an automatic assumption that because he is from Bahrain, Sheikh Salman can sort the issue out. The problem there is that he isn’t a member of the government. So what his really behind this and why are FIFA so animated.

What Al Araibi’s case usefully does for FIFA is give them an opportunity to make Shaikh Salman’s position uncomfortable in the run up to the AFC presidential election in April. An opportunity they have seized upon with obsequious vigour having issued a statement twice. A pity they aren’t so vigorous about pursuing the Saudi Arabian broadcast pirate channel beoutQ that is threatening to undermine the whole economic of the sports broadcast rights business and the funding of football.

There is of course an opportunistic Saudi Arabian undercurrent in all of his as they use their new found (read bought) footie mate Gianni in their geo-political battle with Qatar. With Salman out the way the AFC presidency would be cleared for the UAE’s Major General Mohammed Khalfan Al-Rumaithi to take over the AFC top job – he is Saudi’s proxy in the election, as the UAE has often become across a number of political issues for a lot of Saudi’s dirty work. He would still have to beat Qatari Saud Al Mohannadi.

Shaikh Salman has brought a never-before seen unity of purpose within the Asian Football Confederation. It has created a strong confederation with a talented executive function working effectively for its national members – the current Asian Cup now at the semi-final stage in the UAE has been an example of this.

Away from the playing action there is an on-going and ugly political campaign that would rupture this Asian unity. It is a fissure that FIFA, its president and his pals, are keen to widen in any way possible. It isn’t good for football in this region and would not be positive for football globally.

There is actually quite a lot at stake surrounding Al Araibi’s liberty.