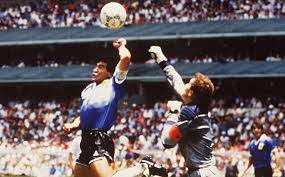 From July, goals scored or created with the aid of a hand or arm, even if accidental, will be disallowed.

Under previous rules, only deliberate handball was considered an offence, with referees given discretion to decide whether or not the ball striking the hand or arm was deliberate.

But from now on, intent will no longer be a factor in situations involving goals or goal-scoring opportunities. The law change is designed in part to stop situations where a goal is scored off a player’s arm or hand.

David Elleray, the former FIFA referee who is now technical director of the International FA Board, explained after Saturday’s decision in Aberdeen: “In the past we’ve managed to improve the laws by focusing on outcome rather than intent.

“What we are looking at particularly in attacking situations is where the player gets a clear unfair advantage by gaining possession or control of the ball, as a result of it making contact with their hand or arm.”

IFAB said the decision would “provide a more precise and detailed definition for what constitutes handball, in particular with regard to the occasions when a non-deliberate/accidental handball will be penalised.”

In other changes approved by IFAB at their annual meeting, in a bid to stop time-wasting substitutes will have to leave the pitch at the nearest goal line or touchline instead of walking – often at a snail’s pace – to their technical area.

And in another change to the rules, players from the attacking team will have to be at least one metre away from the wall when a free kick is being taken. The idea is to cut out the jostling and pushing that so often accompanies free kicks.