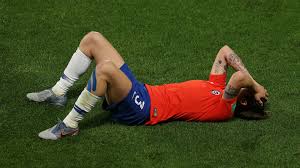 June 21 – Cameroon dramatically snatched an injury-time winner on Thursday to beat New Zealand 2-1 and reach the last 16 of the women’s World Cup, where they will face England.

They were joined by Nigeria who also finished on three points without kicking a ball but there was heartbreak for Chile who missed by the width of the woodwork, losing the place to Nigeria.

Needing a three-goal win to advance against Thailand, Chile were 2-0 up when they were awarded a penalty deep into stoppage time having battered the Thai goal.

However, Francisca Lara struck her effort against the bar and Nigeria went through instead as one of the top third-placed teams by virtue of having scored one more goal.

There was anguish among the Chile players who made history by reaching the finals for the first time but ultimately fell short against a side who had conceded 18 goals in their previous two Group games.

Thailand were the fifth team to be eliminated along with Jamaica, South Korea, New Zealand and South Africa.

“Football does create this type of situation whereby from one moment to another you just go through all types of emotions; from the peak of happiness to the depths of despair, that’s what it’s all about,” said Chile coach Jose Letelier.

The Netherlands meanwhile finished top of Group E with a 100% record after a 2-1 victory over Canada, who finished second and also go through.