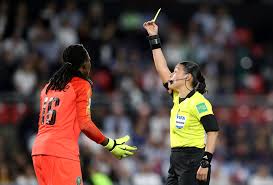 June 24 – Amid widespread condemnation, a new rule that states goalkeepers at the Women’s World Cup must be cautioned for stepping off their goal line at penalties has been suspended.

Under the guidelines, keepers are now booked if they come off their line prior to a penalty kick and so far, three players at the tournament have been shown yellow cards for breaking the rule.

The International FA Board regulation, approved last March and only implemented just before the women’s World Cup, states that: “The goalkeeper must have at least part of one foot on/in line with the goal line.”

Scotland crashed out of the World Cup on Thursday night after a VAR-awarded spot-kick in the dying seconds was saved, only for their keeper to be adjudged to have been marginally off her line and duly booked before the kick was retaken.

Leading women players have condemned the rule and in a rare move, IFAB has accepted FIFA’s request for a temporary dispensation.

FIFA released a statement which read: “Both FIFA and the IFAB … believe that the requirement to caution an offending goalkeeper in Kicks from the Penalty Mark (KFPM) in matches with Video Assistant Referees is not necessary and risks unfairly distorting the KFPM if a goalkeeper is sent off.”

However, the rule is not being scrapped altogether, with only the yellow card part being softened.

Pierluigi Collina, chairman of FIFA’s Refereeing Committee, says the new tweak to the laws of the game is perfectly reasonable.