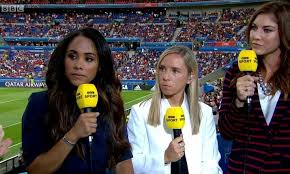 July 17 – British public broadcaster BBC has secured the broadcasting rights for the 2021 UEFA Women’s European Championship, which England will host.

The deal comes on the back of record ratings during this year’s Women’s World Cup, with England’s 2-1 semi-final defeat to eventual winners the US attracting a peak audience of 11.7 million. With an audience share of 50.8%, the semi-final became the highest viewed program of 2019 in the UK so far. England’s group games were also a hit with all three matches surpassing the four million average mark.

“After the success of the World Cup on the BBC and the record-breaking viewing figures for women’s football, we’re delighted to be the broadcaster of the UEFA Women’s Euro 2021 Championship,” said director of BBC Sport Barbara Slater.

“At the start of this summer we wanted to shift the dial on women’s football and I feel the phenomenal coverage from France has done just that. The BBC’s sport portfolio continues to go from strength to strength and we’re thrilled to add the 2021 Euros to that.”

The BBC offered live coverage of England’s 2011 World Cup campaign before showing every game of the 2015 tournament and the 2013 Women’s European Championship, but the broadcaster missed out on the rights for Euro 2017, a tournament that proved popular across Europe and foreshadowed the success of this year’s global showpiece.

The rights acquisition is an important part of the BBC’s women’s football portfolio. In May, the BBC renewed its rights deal for the Women’s FA Cup until 2025 with a commitment to broadcast the semi-final and final live. The corporation is also exploring the possibility of securing future live rights for the Women’s Super League, the domestic top-flight competition which BT Sport currently broadcasts. The BBC currently broadcasts a weekly highlights show.