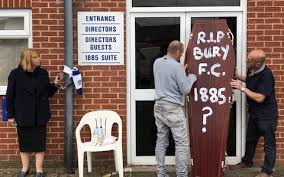 Alistair Burt, a former Minister of the Crown, is one of those increasingly rare Conservative MPs who don’t make you feel like you have been transported to the Planet Zog when you talk or, more recently, listen to them.

I think of him more as the David Speedie or Paul Dickov of Westminster’s Parliamentary football team of the 1990s – a bustling forward, short of stature but brimming with energy and more often than not, a complete pest for the opposition. I particularly remember slicing one of his devilishly inswinging corner-kicks into my own net on the eve of one Tory party conference in Brighton.

Burt is also a passionate fan of Bury, the English third-tier club from Greater Manchester, whose very existence looks to be in dire and imminent peril in the wake of passage last month of a Company Voluntary Arrangement. I have not sought to talk to him about the present situation, which sees the Shakers propping up the league table with minus-twelve points and having yet to fulfil a League One fixture. But it must be absolutely killing him.

Twenty-five years ago, when he was still a Bury MP, Burt contributed a witty and detailed chapter on his love for the club to an anthology entitled Football and the Commons People. Re-reading it helps to bring home just why in an era when football has conquered the world and, consequently, never been richer, the disappearance of clubs such as Bury would be an unmitigated disaster.

Chances are, if you are reading this overseas, you have never even heard of Bury FC. You might view the possible demise of a club of its stature with indifference, like the disappearance of some obscure species of frog from the Amazon rain forest.

Yet the club is older than Barcelona, Juventus or Ajax Amsterdam. It has lived through a lot – two world wars for starters.

And it has a lot more going for it than mere longevity. It has won the FA Cup twice, which ranks Bury on a par with Forest, Sunderland, Portsmouth, Preston North End and the Old Etonians – and above one-time winners such as Derby, Leeds and Southampton. Not only that, it won these finals by the remarkable aggregate of ten goals to nil. When Manchester City this year tied the record for the biggest Cup final win by slamming Watford 6-0, it was Bury’s record from 1903 City was tying.

Burt first stood on the Cemetery End of Bury’s Gigg Lane ground, which he says was built on land given to the club by the Earl of Derby, as a five-year-old. If you have not heard of the club, perhaps you have heard of some of the players Burt says he has seen in their blue and white colours: Neville Southall, Alec Lindsay, Terry McDermott and the fulcrum of Mercer and Allison’s first great Manchester City team, Colin Bell.

He seems to retain particularly fond memories of England and Burnley forward Ray Pointer. Pointer, he says, signed for Bury in August 1965 and had scored nineteen goals by Christmas. “Unbelievably, he was then sold. I was 10 years old and I can still remember the wave of astonishment that went through the town. My Italian barber, Gerald, told me in his shop at the bottom of Walmersley Road and I burst into tears. There are many who date the club’s decline as a serious contender from that very day.”

My own favourite Bury player is Tom Bradshaw, a Scot who was the pivot around whom the club played their way to their highest-ever English league position of fourth – behind Huddersfield, Arsenal and Sunderland – in 1925-26. Like Lindsay and McDermott, he went on to play for Liverpool.

The season was a fascinating one, with the powers-that-be deciding not long before it started to implement a drastic change in the offside law. This reduced from three to two the number of opponents that needed to be between a forward and the goal for him to be deemed onside when the ball was passed to him. The change suited powerful yet skilful centre-halves such as the 6ft-plus Bradshaw, who tended to be expected to keep more of an eye on opposition centre-forwards than in previous seasons, while also helping to shape his own team’s attacks. This in an era when 2-3-5 was the default formation.

Not surprisingly, the early months of the new regime produced some crazy scorelines, including a 6-5 Christmas Day win for Bradshaw and his team-mates over Manchester City. That must have been a happy holiday in the town, notwithstanding the bitter cold that was gripping the country.

Bradshaw’s ability was recognised in 1928, when he was one of Scotland’s Wembley Wizards who routed England 5-1. There were, of course, far fewer international fixtures in those days and, though the match could scarcely have gone any better, this turned out to be his only cap.

If football was a cash-strapped sport, the possible loss of fallen giants such as Bury might perhaps be comprehensible: one can hardly say there is a dearth of league football in Lancashire. But it is the richest sport in the world and England is its cradle. Allow the likes of Bury to slip away for whatever reason and you rot the pyramid and hand the future to a dozen or so puffed-up global brands.