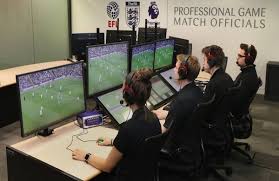 August 23 – After just two Premier League match days and VAR controversy throughout the league, FIFA’s law-making body IFAB has told the Premier League to get in line with a universal usage of the video referee system.

The controversy and confusion around VAR was illustrated again at the weekend when Manchester City’s injury-time winning goal from Gabriel Jesus against Tottenham was disallowed. The referee ruled that the ball had brushed Aymeric Laporte’s arm in the build-up to the goal and discounted the idea that there was no intention from Laporte in a stringent application of the handball rule.

“Each competition must respect the laws of the game and any of The IFAB’s published/communicated guidelines and/or clarifications,” an IFAB spokesperson told Reuters. IFAB’s concern is that the Premier League is applying a different interpretation over the use of VAR from what IFAB, and FIFA, had intended.

To underwrite its position the body sent out a circular on the recent changes in laws, including the issue of the use of VAR in the taking of penalty kicks. The new rules dictate that a goalkeeper must have one foot on the goal-line when a penalty is taken, but the Premier League, alongside with the Bundesliga, have left decisions over possible infringements to the on-field officials.

Before the season kicked off the Professional Games Match Officials Limited, the Premier League’s refereeing body, told clubs, managers and players that the new video technology would not get involved in rulings on the keepers’ feet positions at penalties, but IFAB have now stressed that VAR “must check for any offence by the goalkeeper (and/or the kicker) and the VAR must inform the referee if there is clear replay evidence.”

Goalkeepers will be booked automatically when they infringe the law, said IFAB. At the Women’s World Cup VAR was the object of criticism after several penalties had to be retaken after the movement of goalkeepers was reviewed.

But IFAB also cautioned that VAR should also be applied with restraint and not become a passepartout to review refereeing decisions, insisting that the system’s threshold is a ‘clear and obvious’ error.

“The protocol does not allow referees to ‘review’ an incident where the original on-field decision is not a ‘clear and obvious’ error; ‘reviews’ are not permitted for a ‘second chance’ to look at an incident or to confirm or ‘sell’ a decision which was not clearly wrong.”