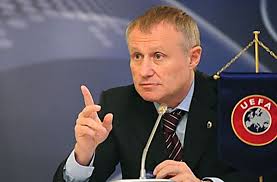 September 9 – UEFA’s dealings with the Ukrainian FA, that for some time have looked to be a timebomb waiting to go off, have been unmasked via new Football Leaks documents that show the European governing body has paid €380 million to an offshore company.

The money, destined for the Ukrainian Football Federation (FFU), has instead been paid to a company controlled by the oligarch Igor Surkis, president of Dynamo Kiev.

Igor is the brother of Grigori Surkis, who was president of the FFU from 2002 to 2012, a member of UEFA’s executive committee from 2004 and had been a vice-president of UEFA from 2013. Grigori had been president of Dynamo Kiev before he passed the presidency on to his brother in 1998. Grigori left his UEFA positions in February of this year.

The revelations were published today by Spiegel journalists Rafael Buschmann and Michael Wulzinger in the Football Leaks 2 book. They have shared the documents with Mediapart and its partners in the EIC network.

The payments to the British Virgin Islands registered company Newport Management were discovered in December 2016 when UEFA’s financial fair play unit checked the accounts of Dynamo Kiev. A UEFA memo said the accounts showed purchases and salaries of players, and agent commissions over a period of 15 years.

Surkis was a supporter of president Michel Platini during his time at UEFA that saw the award of the 2012 European Championships awarded to the joint bid of Poland and Ukraine. The award of that bid – presided over by now FIFA president Gianni Infantino – and subsequent unconfirmed monies paid to entities in Ukraine have long been held in suspicion. It is not clear whether the payments now coming to light cover the rumoured payments surrounding the 2012 Euros.

Platini has always maintained that his preference and vote was for Italy for the 2012 Euros.

When the detail of the payments was identified by UEFA’s FFP investigators in December 2016, Aleksander Ceferin who had been UEFA president for two months, ordered an internal investigation.

According to Mediapart the investigation found that no-one in UEFA knew who Newport belonged to and that between 2002 and 2016, UEFA paid a sum of €338.6 million and CHF50 million to the Ukrainian Federation via Newport and the Swiss then Cypriot account of Newport. In total more than 400 payments intended for the FFU.

Investigations indicate that the FFU requested that their money be paid via Newport as it gave them a better exchange rate. The original “agent agreement” signed in 1999 between Newport and the FFU to handle the money states that Newport “is one of the founders and active partner of Dynamo football club Kiev”.

Newport had long held commercial rights to Dynamo Kiev and the Football Leaks documents reveal that the relationship went deeper into player transfers and payments. behind the scenes of this secret business.

Newport received the money from the sales of several Dynamo players, including in 2011 Senegalese Pape Diakhaté who went to Granada for €4.5 million euros, and Roman Eremenko sold to Rubin Kazan for €9 million.

Newport also paid a number of Dynamo player salaries including Miguel Veloso, Vitorino Antunes, Lukasz Teodorczyk, Júnior Moraes, Derlis González and Admir Mehmedi. Newport also paid the salary and bonuses of Austrian international Aleksandar Dragovic. The Dragovic deal was discovered in 2013 and the club was fined €50,000 – a small amount in comparison to the payments that were being made to the player outside the club’s accounts.

Handling the money in this way enabled to Dynamo Kiev to avoid being seen to break FFP rules, at the same time keeping the club competitive in European competition and allowing it to participate in UEFA increasingly lucrative competitions.

What is unclear is whether Newport paid all the funds it received back to the FFU. Mediapart says that Igor Surkis did not respond to its questions, nor did the FFU. Dynamo Kiev did however say there has been no “misuse of the funds of the FFU” by Newport.