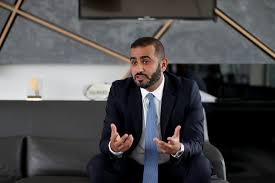 October 8 – The warning signs have been there for a while, the reality may only just be starting to hit home to a football business that is “still sleep-walking to a financial cliff”. Broadcast and media rights revenues that underpinned football’s massive growth are about to burst, and spectacularly so.

This was the chilling message given by beIN Media Group CEO, Yousef Al-Obaidly at the Leaders conference in London earlier today where he gave the keynote speech. He wasn’t issuing a warning, what he was communicating is a reality that is happening now, only masked by existing deals for the major rights owners .

As the bomb dropped in a room full of sports execs, many of them representing rights owners, there was a growing realisation that all the warnings that piracy was killing their business and there would be no-one there to pick up their life-giving financial tab suddenly came home to roost.

“I’m here to tell you how the endless growth of sports rights is over. Not only that, but in certain cases, rights values are going drop off a cliff, and the very economic model of our industry is going to be re-written. Any rights-holders who think that the technology companies of the West Coast are their financial saviours are going to be swiftly disappointed,” said Al-Obaidly.

“This is all because our industry took too long to take piracy seriously, shown by the fact that beoutQ was fully operational for two years and is still partially operational today. And because at the end of these two years, the industry has not learned any lessons.”

For rights owners who are banking on just jumping ship in the hope that new technologies and the OTT services proliferating around the world will step in and save the day (one report suggested broadcast rights would reach $85bn in 2025, a 77% increase on today’s levels), Al-Obaidly is equally dismissive.

“This is so out of touch, it’s crazy. I simply don’t know where this money is going to come from! This is because every deal needs (1) a combination of at least two bidders in a market, and (2) a level of exclusivity in line with the investment made. And while sometimes there are headwinds outside our control, these two factors do not exist,” he said.

“Seemingly, everyone in this industry is asleep at the wheel and refuses to confront the piracy elephant that’s been in the room for years.”

As if the point needed reinforcing to a now shell-shocked room, he said that “it’s too late to stop the correction that is coming to the value of media rights generally. If you don’t get your house in order and quickly, the sports rights market will disintegrate beyond recognition. In fact, winter is already here.”

It is the inability of rights owners to guarantee the exclusivity of what they sell to media companies that is at the heart of the problem.

Last year, Al-Obaidly pointed out, BBC research showed that 50% of fans in the UK had accessed Premier League streams through unofficial providers with a third of those fans not knowing it was illegal. He likened it to making shop-lifting legal.

“I can tell you that as the largest buyer of sports rights in the world, because of beoutQ in MENA and piracy generally, we now regard all sports rights as non-exclusive and our commercial offers will reflect that.”

That news in itself will be sobering for many rights owners who rely disproportionately on beIN fees to fund their events and leagues .

“I am also confident that other broadcasters – of all shapes and sizes – will make similar devaluations, while many once-premium rights will remain unsold,” he said.

All might not be lost, but there is no fast solution and it will take deeds not words to salvage anything meaningful.

Al-Obaidly told his audience that anti-piracy staffing levels should be the biggest priority, major legal and copyright reform was needed, political support must be found at governmental level, consumers must know they are breaking laws, and pirates must be prosecuted.

“As a rights-holder, it is your worst nightmare,” he said.