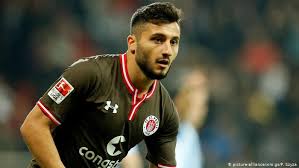 October 15 – Germany’s St Pauli have parted company with their Turkish midfielder Cenk Sahin, after he posted support of Turkey’s military offensive against the Kurds on social media. Sahin will return his old club Istanbul Basaksehir.

Sahin made his statement in an Instagram post in support of his country’s invasion of Kurdish-held regions in northern Syria.

In a statement the St Pauli said: “Sahin has been released from his training and playing duties with immediate effect. The prime factors in reaching the decisions were his repeated disregard for the club’s values and the need to protect the player.”

Sahin hsd posted: “We’re on the side of our heroic military and armies. Our prayers are with you!”

His comments sparked a fierce backlash from fans, who demanded the player be sacked. The Hamburg-based club said an internal review had been conducted as well as talks between club officials and the player.

“After numerous discussions with fans, members and friends whose roots lie in Turkey, it has become clear to us that we cannot and should not attempt to gauge nuances in perceptions and attitudes from other cultural backgrounds in detail,” said St Pauli.

“That we reject acts of war is not open to doubt or discussion, however. These acts, and the expression of solidarity with them, run counter to the values of the club.”

Sahin’s contract has not been terminated, but St Pauli has given him permission to train and play for other clubs. It now seems that the midfielder will take up an offer from his former club in the Turkish capital to train. Basaksehir club president Goksel Gumusdag said: “This is his home. If he completes the necessary procedures he can train with our team at any time.”