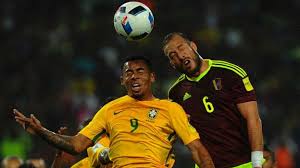 October 22 – A landmark study into the links between football and brain disease has produced alarming results which suggest that professional players are more likely to suffer than others.

The new research shows the rate of death from Alzheimer’s disease was five times higher among footballers than among the general population, three and half times higher from dementia and twice as high from Parkinson’s disease.

Experts at Glasgow University, who released details of their findings in The New England Journal of Medicine,  have been investigating fears that heading could be linked to brain injuries and  compared deaths of 7,676 former players to 23,000 from the general population.

The sample was taken from men who played professionally in Scotland between 1900 and 1976.

The long-awaited study was commissioned by the English Football Association and the Professional Footballers’ Association  and raise fresh concerns about the effects of consistently heading the ball, at least at professional level.

It should be noted that although footballers had higher risk of death from neurodegenerative disease, they were less likely to die of other common diseases, such as heart disease and some cancers, including lung cancer, according to the new statistics.

“This is the largest study to date looking in this detail at the incidence of neurodegenerative disease in any sport, not just professional footballers,” said consultant neuropathologist Dr Willie Stewart, who led the survey.

“Our data show that while former footballers had higher dementia rates, they had lower rates of death due to other major diseases.

“As such, while every effort must be made to identify the factors contributing to the increased risk of neurodegenerative disease to allow this risk to be reduced, there are also wider potential health benefits of playing football to be considered.”

Former England international striker Jeff Astle developed dementia and died in 2002 at the age of 59. An inquest found heading heavy leather footballs repeatedly had contributed to trauma to his brain.

“We welcome the work done by Dr Stewart and his team, but this study was always going to leave a lot of questions unanswered,” said a statement.

“We have known for some time there is a link between the cumulative effect of repeated blows to the head – such as those suffered by boxers – and degenerative neurological conditions such as dementia.

“The fact this long-awaited study has now identified a link in former footballers will no doubt lead to questions about how this will impact the modern game.

“It is vital this research is now built upon, with a particular focus on the relative risks of heading lightweight modern footballs.”

The English FA said that despite the study, there was not yet enough evidence to change any aspect of the game.

“Our research shows the number of aerial challenges has already been reduced significantly over the years as we have changed to smaller pitches and possession-based football,” said the FA chief executive, Marc Bullingham.

“However, as new evidence comes to light, we will continue to monitor and reassess all aspects of the game.”

Nevertheless, the findings seem bound to increase the pressure on the International Football Association Board, which meets in Zurich on Wednesday, to go ahead with plans to allow for  “concussion substitutes” when players are assessed for head injuries during  matches.