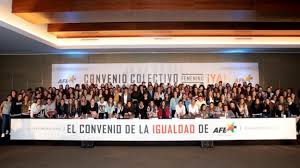 October 24 – Almost 200 women players in Spain’s first division have voted to strike in a disagreement over pay and conditions.

The action was supported by 93% of players employed by 16 clubs, only a few of which are professional, at a meeting in Madrid on Tuesday after more than a year of failed negotiations.

Clubs are proposing a minimum wage of €16,000 but unions representing the players are asking for at least €20,000.

Although women’s football has grown in Spain since their debut at the 2015 World Cup, the clubs say they cannot afford the players’ demands.  But if they don’t get their way, they will stop playing in November.

The clubs have imposed a limit of 20 working hours per week, while players have insisted on 40 and say they are ready to agree to at least 30.

“We are 100% football players, every hour of the day,” said Ainhoa ​​Tirapu, vice-president of the Association of Spanish Footballers (AFE) women’s football committee and a goalkeeper for Athletic Bilbao and the women’s national team. “But there are red lines such as bias.”

The players are due to meet in two weeks with the Spanish Football Federation (RFEF) to further discuss the matter.

“It’s not only about the money, it’s about our rights,” Tirapu said. “We hope to reach an agreement at some point, but we need this drastic measure because it’s the right moment for women’s soccer. This is not being done for ourselves, it’s being done for our future players.”