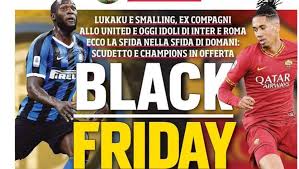 Both players – former teammates at Manchester United – condemned the headline, which was in English, on social media while Roma said the newspaper would be banned from its training ground for the rest of the month.

The newspaper defended the headline as “innocent,’’ arguing its intent “was only praising diversity” and that it had been “transformed into poison by those who have poison inside.”

However, Smalling and Lukaku were clearly not convinced.

“Whilst I would have liked to spend the day focusing on the big game tomorrow, it is important that I acknowledge that what occurred .. was wrong and highly insensitive,” Smalling wrote on Twitter. “I hope the editors involved in running this headline take responsibility and understand the power they possess through words, and the impact those words can have.”

Lukaku called it the “dumbest of headlines I have ever seen in my career,” and added: “You guys keep fueling the negativity and the racism issue.”

Roma issued a joint statement with Inter’s rival AC Milan saying both clubs “have decided to ban Corriere dello Sport from our training facilities for the rest of the year and our players will not carry out any media activities with the newspaper during this period.”

“Both clubs are aware that the actual newspaper article associated with the ‘Black Friday’ headline did portray an anti-racist message and for this reason, we have only banned Corriere dello Sport until January,” Roma added.

Serie A has been plagued by racist incidents this season, with Lukaku himself and Brescia forward Mario Balotelli among those racially abused by supporters. An Italian TV pundit was sacked for saying the only way to stop Lukaku was to give him “10 bananas to eat” and last week all 20 clubs in Italy’s top tier signed an open letter calling for the eradication of the “serious problem with racism”.

UEFA said in a statement to The Associated Press that the headline choice was “unfortunate” and was “unlikely to help a mature discussion of the serious issue facing the game and wider society” while Europe’s anti-discrimination body FARE retweeted the headline under the comment: “The media fuels racism every day. This is today’s edition of Corriere dello Sport.”

In a further defence of its position, Corriere dello Sport today declared: “Who are you calling racist? Lynching of a newspaper that for a Century has defended liberty and equality.”

“Part of the problem we have with Italy and countries like that at the moment is people do not know where to draw a line,” he was quoted as saying. “They don’t know what is the right or wrong thing to do, what is appropriate or inappropriate and what might be racism and what might be acceptable.

“Would they ever take two white Italian players and say it’s ‘White Tuesday’? They wouldn’t and this is the issue. Why would you pick out two players who are black and highlight their race as a way to build up to the match? It crosses the line of acceptability.”