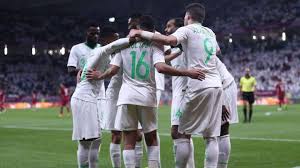 December 6 – Saudi Arabia and Qatar ended 2019 the way they had began it with a blockade derby. This time the venue was Doha’s al-Janoub Stadium, with the Green Falcons winning thanks to a first-half goal from striker Abdullah al-Hamdan. The Saudis will now meet Bahrain in Sunday’s Gulf Cup final.

Amid a diplomatic stand-off in the Gulf  a match between the two feuding nations transcends the character of a mere football game. In 2017, Saudi Arabia, the United Arab Emirates, Bahrain and Egypt ceased their diplomatic relations with Qatar, accusing the tiny Gulf state of supporting terrorism. Qatar has always denied those accusations, but the Saudi-led blockade has had socio-economic ramifications in the region.

On Thursday night the two neighbours met in the last four of the Gulf Cup. The hosts dominated match, but it was a 28th-minute strike from al-Hamdan, who exploited a gaffe from Qatari goalkeeper Saad Al Sheeb, that was the game’s defining moment.

An industrious Qatari team failed to translate sustained second-half pressure into goals. Abdulaziz Hatem had a direct attempt from a corner ricochet off the woodwork and in injury time Boualem Khoukhi’s half-volley sailed inches wide. On the counterattack, Saudi captain Yasir Al Shabrani almost doubled his team’s lead in the 83rd minute, but Al Sheeb tipped his attempt over.

The match itself passed off without major incident. The Saudi anthem was observed without boos and Saudi flags were visible in the stands. Earlier on Thursday, Bahrain had flown in supporters for its semi-final against Iraq, but Saudi Arabia didn’t follow suit.

Last January, the two neighbors met for the first time on the football field since the blockade at the Asian Cup in the United Arab Emirates. Two goals from striker and tournament sensation Almoez Ali was enough for Qatar to see off the Saudis in a Group E encounter that had lacked the bite the build-up had promised, more often resembling a training game than a competitive fixture.

Thursday’s rematch only happened following a last minute decision by Saudi Arabia and the United Arab Emirates to reversd their decision to boycott the tournament, a move that has been interpreted in some quarters as a first stage rapprochement between Doha and Riyadh.

In another sign of the thawing of relations, Saudi King Salman also invited Qatar’s Emir Sheikh Tamim bin Hamad Al Thani to attend the Gulf Cooperation Council’s 40th summit in Riyadh later this month. With this background the semi-final became the talk of the town, selling out and even creating something of a black market, almost unheard of in the Qatari capital.

The result will have been disappointing for the Asian champions, who would have hoped to cap off 2019 with another title having won Asian Cup in January. Next year, the Qatari team will return to play in South America’s continental championship, co-hosted by Argentina and Colombia.

The Gulf Cup will concludes Sunday with the Saudi Arabia vs Bahrain final.