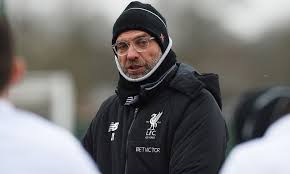 January 28 – Liverpool manager Jurgen Klopp is facing accusations of undermining the game’s oldest domestic cup competition in a row over whether English football’s first winter break is being fairly applied.

Klopp says he is pulling his entire first-time squad out of an  FA Cup replay with third tier Shrewsbury Town next week and using his under-23 side instead because the fixture clashes with when his senior players should be enjoying a much-needed rest in the middle of a gruelling season.

Klopp’s stance in giving priority to the Premier League’s midwinter break over the fourth-round replay with League One opponents Shrewsbury, who pulled off a shock 2-2 draw on Sunday against the runaway top-flight league leaders, has caused outrage among purists of the game, some of whom have even suggested Liverpool should be thrown out of the competition.

Klopp has the support of the Liverpool hierarchy as well as those who back the idea of a meaningful winter break in a country that has for years resisted the concept.  The workload heaped on his players, who have had to play the Club World Cup in addition to European and domestic fixtures, has been a source of irritation for Klopp for many weeks and has now come to a head.

When is a winter break not a winter break is Klopp’s point which on the one hand is perfectly valid. Next week’s replay date strikes at the very heart of that question, especially given the fact that in the subsequent fifth round, being staged for the first time in midweek, replays are being scrapped altogether.

On the other hand, other top-flight clubs involved in fourth-round replays, such as Tottenham Hotspur and Southampton, have given no indication that they will ditch their first-team squads altogether. Whilst they may not approve of the ill-thought-through scheduling and will doubtless make changes, they will maintain respect for the tournament and its history despite losing part of their own winter break.

Spare a thought, too, for the smaller clubs left in the competition for whom the financial benefits of a cup run are far more rewarding than for the likes of Liverpool. Shrewsbury’s dream of progressing to the fifth round is as much for financial reasons as glory. Likewise Oxford United who have a sell-out replay against top-flight Newcastle to look forward to.

For the likes of Klopp, however, being forced to replay a cup game when his players are supposed to be resting is one step too far. It is possible that even Liverpool’s kids will be too strong for Shrewsbury on home soil – though they were taken apart by Aston Villa’s second string in the quarter final of the League Cup when Liverpool opted to prioritise the Club World Cup.

But the bigger picture is one of the FA Cup’s prestige being devalued by the big boys – or some of them.

The fact is the winners at Wembley in May get a mere £3.6 million and have to share gate money on the way to the final. Compare that with the prize money on offer in the Premier League and the Champions League.  As ever, money talks.

As the row escalated,  the English Football Association stuck to its guns, stressing that every club agreed to this season’s FA Cup fixture schedule and that they knew full well that fourth-round replays might cut into their winter breaks.

“The FA went to great lengths to create an annual mid-season player break, working closely with the Premier League and its clubs. It is a new and significant addition to the English football calendar and is designed to benefit clubs and their players,” said a statement.

“To accommodate the annual mid-season player break, the FA rescheduled the FA Cup fifth round to midweek and removed fifth-round replays from the calendar. This allowed the Premier League room in its calendar to have a split round of fixtures over two weekends.

In his defense, Klopp has cited a letter all top-flight clubs received from the Premier League asking all clubs to respect the February winter break, staggered over two weekends, and not organise any friendlies in order to give them a rest of at least 15 days. He states he is simply adhering to that.

Yet Liverpool are still getting an 11-day rest they would not have previously received, a point stressed by the owner of League Two Accrington Stanley, Andy Holt .

“’This is a battle the FA must win or their flagship competition is totally undermined,” said Holt. “Liverpool need censuring and fining heavily. It’s not their football. It’s ours.”

Klopp has become a hero to Liverpool fans and respected throughout the country not just for the way his team has played but also for his straightforward and honest approach embedded in a respect for the game, the fans and the culture. However, not even he will be at the replay. Respect hard earned can be easily lost.