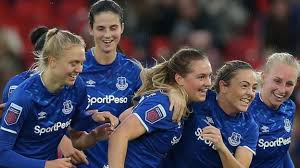 March 9 – Everton have restructured their women’s team operations under their ‘One Club’ vision that will see CEO Denise Barrett-Baxendale chair a new Senior Leadership Team for Everton Women, and increased finding for the team.

The revamped women’s structure under Willie Kirk will mirror that of the men’s operations under Carlo Ancelotti.

Everton were one of the eight founding members of the Women’s Super League (WSL), as well as winning the FA Women’s Premier League, FA Premier League Cup and two FA Women’s Cups since forming as Everton Ladies in 1995. The club currently lies 7th in WSL but under the new structure sees an opportunity to challenge for the major honours in the women’s game.

“This football club has played a significant role in the development of the women’s game. As well as winning a host of domestic silverware and playing in European competitions, Everton has produced a number of women’s players that have gone on to represent their countries with distinction at major tournaments,” said Barrett-Baxendale.

“Our ‘One Club’ vision is a clear symbol of togetherness and unity. We have already taken the progressive and significant steps of bringing our men’s and women’s teams closer together in identity and location, with them both using the state-of-the-art facilities at USM Finch Farm. We will now build on the foundations for success – with a clear focus on competing for honours with the elite of women’s football.”

Director, Sasha Ryazantsev, will take on the new role of Managing Director, ensuring Everton Women have senior representation in the Everton boardroom as the club uses its resources and back-office systems to provide a springboard for the women’s team.

Sarvar Ismailov  will move from his role as Global Partnerships Consultant at the Club to become Everton Women’s first Sporting and Commercial Director.

The new funds released by the club will be used for scouting and recruitment, while the club will build a commercial programme around the women’s teams, as well as increase marketing and promotion, media and digital coverage and increase involvement with the Club’s community programmes through Everton in the Community.

Everton Women recently moved into a new purpose-built stadium at Walton Hall Park, less than a mile from Goodison Park.