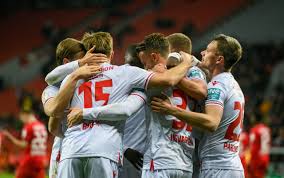 March 26 – Union Berlin are the latest German top-flight team to agree to forego their wages because of Covid-19, another example of Bundesliga clubs putting their survival first.

Six days after fellow top-flight side Borussia Moenchenglandbach waived its salaries, newly promoted Union have followed suit. Bayern Munich and Borussia Dortmund players have also agreed to accept a cut in wages to compensate for loss of income from broadcasting, sponsorships and ticket sales

Union Berlin were based in the former East Germany and went  into the third tier following German reunification. They were promoted to the Bundesliga for the first time last season and are on track to retain their Bundesliga status for another year sitting 11th in the table.

“These are exceptional circumstances we have to deal with,” said Union Berlin president Dirk Zingler.

“Our club’s purpose is football. If it ceases to exist, then it will touch the core of our existence.

“The management, our staff, the squad and backroom staff have worked hard in recent months to ensure success in the Bundesliga. Now they are giving up a lot of money to get through this crisis together.”