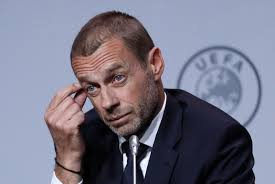 March 30 – UEFA president Aleksander Ceferin says the current season “will probably be lost” if it cannot be restarted by the end of June.

UEFA has already postponed Euro 2020 until next year but has so far stopped short of rescheduling the Champions League and Europa League which have only got as far as the last 16.

Ceferin says domestic seasons could be finished behind closed doors but that it has to happen by the end of June to prevent an overload of fixtures ahead of the subsequent season even though that, he says, can technically be put back.

UEFA has set up a task force to draft up a potential calendar for whenever the Covid-19 pandemic ends.

“If we don’t succeed in restarting, the season will probably be lost,” Ceferin said in a newspaper interview in Italy.  “There is a plan A, B and C. The three options are to start again in mid-May, in June or at the end of June.

“There is also the possibility of starting again at the beginning of the next [season], which would then be postponed, starting a little later. We will see the best solution for leagues and clubs.”

“It’s hard for me to imagine all the matches behind closed doors, but we still don’t know whether we’ll resume, with or without spectators.  If there was no alternative, it would be better to finish the championships.”