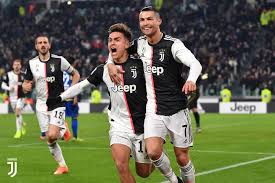 March 30 – Juventus players and coach Maurizio Sarri have accepted a temporary pay cut to their salaries in a move that is designed to alleviate the financial ramifications of the global coronavirus on the club.

The players will waive four months’ wages, the club has announced. The agreement is estimated to be save the  €90 million in salaries for the period.

On Saturday, Juventus said they had “reached an understanding with the players and the coach of the first team regarding their compensation for the residual portion of the current sport season”.

In Italy, football has been suspended indefinitely as the country struggles to contain the coronavirus. Italy has been the worst hit country in Europe, with more than 10,500 casualties to date. The immediate future of this season’s Serie A remains in doubt.

But Juventus will negotiate increases in pay for the squad if the remaining Serie A fixtures can be completed.

The statement added: “The understanding provides for the reduction of the compensation for an amount equal to the monthly payments of March, April, May and June 2020. In the coming weeks, personal agreements with the players and the coach will be finalised, as required by the current regulations. The economic and financial effects of the understanding reached are positive for about 90 million euros for the 2019-2020 financial year.

“Should the current season’s matches be rescheduled, the club will negotiate in good faith with the players and the coach conditional increases of compensations according to the actual resumption and finalisation of official competitions.”

Juventus president Andrea Agnelli had previously described the current situation as an “existential threat” for the whole sport. Juventus last played on March 8 when the team defeated Inter Milan behind closed doors in Turin.

The boss of the Italian football federation, FIGC, praised Juventus’ action.  “The agreement reached by Juventus is an example for the whole system,” said FIGC president Gabriele Gravina. “Unity and solidarity in the world of football represent the first great response to the emergency that we are experiencing. Only through the cooperation of all the stakeholders we will make soccer stronger.”

In Spain, Barcelona and Atletico Madrid are mulling over plans to scale back their players’ wages temporarily.