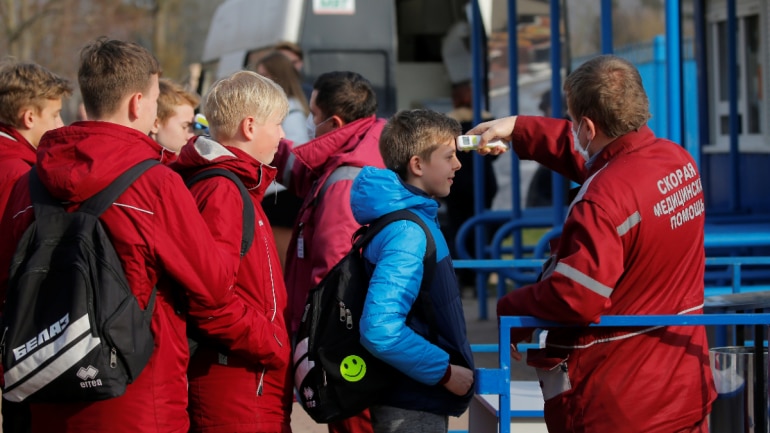 March 30 – Last league standing? Football may have ground to a halt in almost every corner of the world – but not in Belarus.

There, not only are matches continuing but in order to stave off the threat of Covid-19, fans are being advised to drink vodka and go to saunas.

For some reason, Belarus (population 9.5 million)  has had only around 100 cases of Covid-19 and no deaths. As a result, it’s business as usual in the Belarusian Premier League with no restrictions on mass gatherings.

Saturday’s derby between two teams from the country’s capital, Minsk was one of six top-flight games and drew a 1,750 crowd as supporters flouted World Health Organization (WHO) guidelines for social distancing.

Aside from perhaps BATE Borisov, who have played in the Champions League, Belarusian clubs are largely unknown outside the country. But remarkably, the league’s increased popularity during the current pandemic has led to new broadcasting deals in as many as 10 countries, according to Reuters, including Russia, Israel and India.

Former Arsenal and Barcelona player Alexander Hleb, Belarusian football’s most famous export, is in voluntary self-isolation as a precaution but was quoted as saying: “I am against any kind of panic. Regarding attending football matches – here, everyone decides for himself. Our players do not panic out on to the field and play. Among them are many of my friends and, if there is a real threat to their health, the health of the crowd, I’m sure the matches will stop.”

But the country’s President Alexander Lukashenko said sport was the “best anti-virus remedy”.

He has also stated that regular trips to the sauna, working in the fields and drinking copious amounts of vodka are the best ways to stay healthy – dismissing stricter measures imposed in neighbouring Russia and elsewhere as “frenzy and psychosis”.

“People are working in tractors. No one is talking about the virus,” Lukashenko said. “The fields heal everyone.

“I don’t drink, but recently I’ve been saying that people should not only wash their hands with vodka, but also poison the virus with it. You should drink the equivalent of 40-50 milliliters of rectified spirit daily. But not at work.”

“Go to the sauna. Two or three times a week will do you good. When you come out of the sauna, not only wash your hands, but also inside (with) 100 grams (of vodka).”

“We’ve taken all the measures recommended by the Sports Ministry. All those who are in contact with fans are supplied with gloves,” he said.