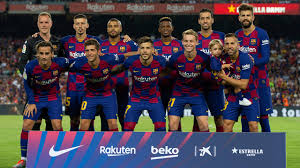 March 31 – Barcelona’s players have agreed to take a 70% pay cut so that the club’s other employees can earn their full salaries during the coronavirus crisis.

But they are hugely displeased with the way they say their image has been undermined from within the club.

Lionel Messi and his team-mates wrote in a social media post: “A lot has been said about Barcelona’s first team and the players’ salaries during the country’s state of alarm.

“Before anything, we would like to make it clear that we have always wanted to reduce our salaries as we perfectly understand that this is an exceptional situation and we ALWAYS were the first ones to help the club when it asked.

“Actually, we have done that on our own in moments when we felt it was necessary or important.”

Reacting to criticism that the players had not made any announcements about what they were doing to help others during the pandemic, Messi added: “We haven’t spoken until now because our priority was to find real solutions in order to help the club and its workers in this very difficult moment.”