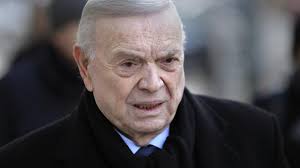 March 31 – Jose Maria Marin, 87, is on his way home. Amid health concerns in times of the global coronavirus pandemic, the former Brazilian football supremo has won his release from an American prison, where he was serving a four-year sentence for his role in the FIFAgate scandal.

With governments around the world ponder the fate of the prison population and the option of releasing those that do not pose a threat to society, Marin requested his release from the federal prison camp in Allenwood, Pennsylvania, where he was being held. On Sunday, his lawyers argued that the Brazilian needed to be considered for release, citing the coronavirus, his medical history and his advanced age. Marin was one of the original ‘Zurich Seven’, arrested in May 2015 in the FBI raids on the Baur au Lac hotel in Zurich.

At the prison camp in Allenwood, one inmate has reportedly tested positive for the coronavirus. On Monday, U.S. District Judge Pamela Chen in Brooklyn granted the request. Chen cited Marin’s age, “significantly deteriorating health” and “elevated risk of dire health consequences due to the current COVID-19 outbreak.”

The judge also considered his status as a nonviolent offender and the fact that Marin has served the majority of  his four-year term.

FIFAgate brought the world federation to its knees. Marin spent five months in detention in Switzerland before his extradition to the United States, where he was sentenced to four years behind bars last year.

The New York court had found him guilty of accepting nearly $6.6 million in bribes from sports marketing companies in exchange for contracts to broadcast major tournaments. He was also ordered to forfeit $3.3 million and pay a $1.2 million fine. In 2019, FIFA belatedly slapped him with a lifetime ban from the game and a fine of CHF1 million.

Marin led the Brazilian Football Confederation (CBF) for three years, from 2012 to 2015. He succeeded another disgraced Brazilian football official and CBF supremo, Ricardo Teixeira. Texeira is also wanted by the US Justice Department but has not left Brazil since the indictments were issued.