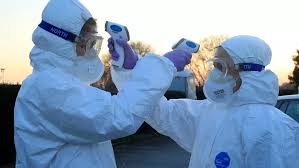 April 30 – When the medical experts of football’s two largest bodies disagree over the immediate future of the game because of Covid-19, you know there is no easy solution.

While FIFA’s medical chief Michel d’Hooghe has urged football authorities to seriously consider calling off the season because of Covid-19 fears, saying “he world is not ready for competitive football,”  his European counterpart says it is “definitely possible” to restart the suspended 2019-20 campaign.

“In discussing any return to playing competitive, elite level football, the health of the players, all those involved in potential games and the public at large is of paramount importance,” UEFA’s Tim Meyer said in a statement.

“All football organisations which are planning the restart of their competitions will produce comprehensive protocols dictating sanitary and operational conditions ensuring that the health of those involved in the games is protected and the integrity of public policy is preserved.

“Under these conditions and in full respect of local legislation, it is definitely possible to plan the restart of competitions suspended during the 2019-20 season.”

The comments of Meyer, who is also head of  the newly-formed UEFA medical sub group examining issues around a return to play, were not only in direct contrast to those of d’Hooghe but also came before, not after, the decision by France to end its domestic season after Prime Minister Edouard Philippe barred all professional sport until the start of September.

France joined the Netherlands and Belgium in terminating their seasons prematurely and on Wednesday Italian sports minister Vincenzo Spadafora warned his country may have to follow suit.

One thing that is now clear amidst all the uncertainty and differences of opinion is that if and when any top-grade league football does take place this summer, it will only be in certain countries, most likely those where the loss of tv rights income threatens the fabric of the league. Better than nothing perhaps but certainly not the collaborative approach UEFA was hoping for in its attempt to co-ordinate domestic and European programmes.