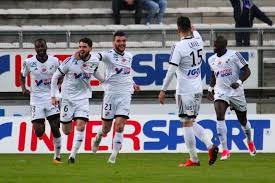 May 13 – In a classic example of what sports lawyers have warned could happen when leagues are stopped in the tracks and not completed because of the coronavirus pandemic, Amiens have started legal proceedings for their “unjust” relegation from France’s Ligue 1.

The LFP, which runs the top two divisions in French football, decided late last month to call an end to the season with 10 of the 38 scheduled rounds of games still to go.

The move was inevitable after the French government ruled out any prospect of matches returning before August.

In a sense, the league’s hands were therefore tied but it meant that Paris Saint-Germain were declared champions and the bottom two clubs, Amiens and Toulouse, were condemned to relegation to Ligue 2 with  Lorient and Lens promoted in their place.

The English Premier would almost certainly adopt the same sort of strategy if their season is also called off, but Amiens insist that’s not the way it should work.

“We find that this decision goes against sporting fairness. The decision is a punishment from the league. It is unjust,” the club’s president, Bernard Joannin, said during a press conference on Tuesday.

“We have been forced into fighting, into going to court to try to overturn this unfair decision.”

Amiens were four points away from what would have been safety when action was suspended, but were still due to play several of their rivals in the relegation battle.

“We are not contesting the decision to stop the season. That is not really the object of these proceedings. It would be a bit inappropriate,” said the club’s lawyer, Christophe Bertrand. “However, what we are contesting are the consequences of the decisions that were taken.”

In other words, the decision to stick with promotion and relegation which would happen in England were the season to end there now too. The same might well apply to the likes of Spain and Italy though no concrete rulings have been made.

Amiens, who were playing in just their third top-flight season having won promotion in 2017, believe a proposal to temporarily increase the number of clubs in Ligue 1 from 20 to 22 should have been considered, thereby saving them and Toulouse from the drop.

Lyon have also threatened legal action with their president Jean-Michel Aulas vehemently opposed to the league’s decision, which left his club seventh and set to miss out on a place in Europe next season for the first time in almost quarter of a century.