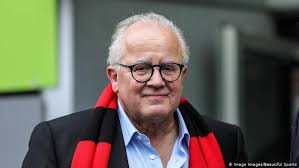 May 20 – German football bosses want to see deep reaching financial reforms in the game following the coronavirus pandemic, with Bayern Munich chairman Karl-Heinz Rummenigge and DFB president Fritz Keller becoming the latest voices to back the introduction of a salary cap.

“We must bring professional football closer to the people again,” said Keller (pictured) in a statement released on the German FA’s website. “We have to think about a salary cap. I will be in contact with my colleagues at national and international level as well as with UEFA President Aleksander Ceferin. The end result must be a regulation that conforms to European law, which also applies to Great Britain.

“There are absurd salaries and transfer fees that are no longer credible. We have to talk about salary caps. I am glad that I agree with Karl-Heinz Rummenigge on this point. Therefore we will write a letter to UEFA president Aleksander Ceferin.”

He also attacked the money agents siphon off.  “Commissions for agents and transfer fees are increasingly irritating society and alienate it from our beloved sport,” said Keller. “Football as a whole is called upon to finally provide satisfactory answers to these problems.”

While some of Keller’s words may sound opportunistic, there seems to be a growing realisation in the German game that football’s financial bubble may be over and that the sport won’t be able to simply carry on regardless.

At the weekend, Rummenigge similarly touted the idea of salary caps. “[Former UEFA president] Michel Platini had the idea years ago to introduce a salary cap in Europe based on the American model,” said Rummenigge in an interview with Sky.

In the USA, major sports league have implemented various salary caps to keep franchises profitable, but any such cap in Europe would have to be compatible with EU law. Brussels generally looks unfavourably at proposals that restrict competition.