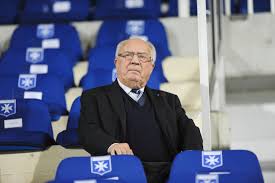 During the course of his long reign, the club from a small provincial town in Chablis country rose from French regional football to national league and cup success and the Champions League.

Throughout these decades of success, the club was managed by one man – Guy Roux, a straight-talking but exceptionally shrewd man-manager from Colmar in eastern France, who for one month in July 1960 was player number 29 for the south London club Crystal Palace.

While well-known figures such as Eric Cantona and Laurent Blanc passed through from time to time, the two men ran a thrifty ship, building up the youth arm to ensure a flow of gifted young players drilled in the Auxerre way.

Other unusual and innovative talent pathways were also tapped. The club was among the first to take advantage of the exodus of established internationals from eastern Europe. Polish World Cup striker Andrzej Szarmach started playing for Auxerre as early as 1980. (The French sports minister at the time happened to be mayor of Auxerre.)

Between 1993 and 2005, while the French national team was becoming the best in the world, Auxerre won the league title once and the Coupe de France four times. The club’s best Champions League performance came in 1996-97 when, having topped a group bracketing them with Ajax, Grasshoppers Zurich and Glasgow Rangers, the French club were knocked out in the quarter-finals by Borussia Dortmund, the eventual winners.