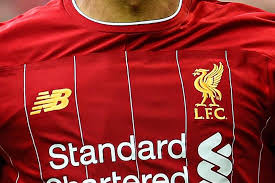 June 3 – New Balance, who are being replaced by Nike as Liverpool’s kit supplier from next season, have agreed a short-term extension to their current contract that will see them through to July 31 and the likely crowning of Liverpool as Premier League champions.

Nike had been scheduled to take over the Liverpool contract from June 1 but will now start August 1 following the pushing back of season ending dates by the Covid-19 pandemic.

Nike secured the rights to Liverpool’s kit in an annual £30 million deal plus 20% of all retail sales. That  was less than the £45 million annually paid by New Balance who challenged the deal in court saying they had the right to match any new offer.

The court ruled against New Balance on the basis that it couldn’t match the marketing and distribution power of Nike.

The start of Premier League club’s contract with Nike has been pushed back to August 1.