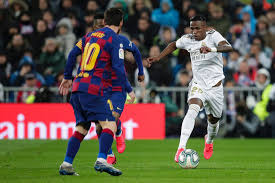 The Brazilian and Real Madrid teenager has committed to a long-term commercial management agreement with MediaCom Sport & Entertainment, the talent division of MediaCom, a WPP company.

Mediacom S&E will represent Vinicius in all commercial and marketing activities to build his personal brand.

Born in Rio, Vinicus began his career at Flamengo making his senior debut in May 2017 aged 16. He signed for Real Madrid a few weeks for €45 million – as record for a Brazilian U-18 player. He moved to Spain when he was 18.

Since he has been in Madrid, Vinicius has made 38 appearances for the first team and in March scored the first goal in Real’s 2-0 El Clasico win over Barcelona.

Internationally he has represented Brazil at all age group levels but his full national team debut was delayed in March last year when he was oinjured playing for Real Madrid. He dedin’t secure a place in Brazil’s 2019 Copa America squad but eventually made his senior debut last September.

Mediacom have represented commerically some of the biggest names in world sport including Pele and cricket legend Brian Lara. Misha Sher, VP of MediaCom Sport & Entertainment, believes that the talent business is about to be disrupted in a major way as sport comes out of coronavirus lockdown.

“Never before have athletes had such an incredible opportunity to transcend their sport and develop a strong, personal brand that’s relevant in culture.  Vinicius is one of the most exciting young athletes on the planet and we’re privileged to have the opportunity to help shape his journey,” said Sher.

“As a global agency network we’ve been involved in growth of some of the most iconic brands in the world and we will deploy these diverse capabilities to support Vini.”