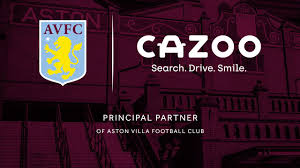 The “multi-year partnership” will begin at the start of the 2020-21 season. Two weeks ago Cazoo unveiled a new shirt sponsorship with Everton.

Financial terms were not disclosed, though presumably pricing will have reflected both the deep uncertainty over whether Villa can retain their present top-tier status and current conditions in the overall sports sponsorship market. Even though televised action has now resumed in the two top English divisions, some expect a buyers’ market to prevail for sponsorship while in-stadium spectators are still absent and brick-and-mortar retailers still impacted by some people’s reluctance, or inability, to venture far from their homes.

The club’s sponsor this season, when it returned to the Premier League after winning the 2018-19 Championship play-offs, has been online betting and gaming site W88. Villa had already served notice that this agreement would not be renewed.

While the club currently lies in the Premier League relegation zone, it is level on points with Bournemouth and West Ham, the two sides immediately above it, and only a point behind Watford in 16th place.

Cazoo, which was launched only last year, is currently pursuing an extensive marketing campaign to accelerate online car buying. It claims to be pioneering a shift to this in the UK, with consumers buying and financing used cars online prior to having the vehicle delivered to their door.

Alex Chesterman, Cazoo’s founder and chief executive, said the company was “looking forward to next season and working closely with the club as we make Cazoo a household name by reinventing the used car buying experience”.

Nicola Ibbetson, Villa’s chief commercial officer, said: “We are immensely proud to have partnered with one of the fastest growing businesses in the UK”. The deal, she added, provided both parties with “an opportunity to work together for many years to come”.

Contact the writer of this story at [email protected]om