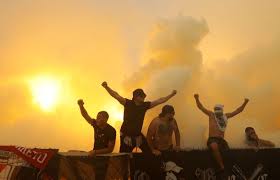 Local authorities had green-lighted an attendance of 12,000 fans for one of the flagship matches of the domestic season, even if the Bulgarian league’s resumption on June 5 had not gone without incidents after a three-month hiatus due to the coronavirus pandemic.

Health Minister Kiril Ananiev was in the stands to witness fans breaking social distancing rules. He had been ordered by Prime Minister Boyko Borisov to attend and monitor the match, the 80th Bulgarian Cup final.

Fans grouped together behind the goals and the referee even had to halt the game for a few minutes after the break after CSKA fans set off flares and threw smoke bombs.

Authorities had asked fans to wear face masks and stewards offered supporters a free one outside the ground. The majority of fans however didn’t heed the advice. Fans of Lokomotiv also displayed a ‘White Lives Matter’ banner.

Before kick-off, Bulgaria’s Sports Minister Krasen Kralev had warned that unruly behavior during the match could lead to “more drastic measures”. Bulgaria’s competition restarted on June 5, with various restrictions, including on maximum capacity. Inside the stadiums, social distancing rules are supposed to apply.

The final itself won’t live long in the memory with both teams playing out a goalless stalemate before Plovdiv won 5-2 on penalties.