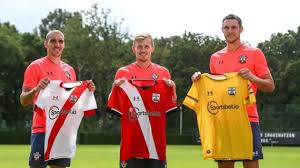 The last minute deal replaces Chinese firm LD Sports less than three weeks before the start of the new season. It also resulted in the club having to stop replica club sales.

Saints are 80% owned by Chinese businessman Gao Jisheng who has put the club up for sale with a price tag of £250 million. LD Sports – described as a Chinese sports content, marketing and entertainment platform – had been with the club for just one season.

A club statement said: “Over the last week, we have endeavoured to secure confirmation that LD Sports are still an appropriate and viable partner for the club but have been left with no alternative other than to end the partnership today with immediate effect.”

Fans who have already bought the new season kit are being asked to be patient while the club sources a supply solution for “updating their shirts.”

The Sportsbet.io sportsbook is part of the Coingaming Group. The brand will feature on the front of the first-team and Under-23 shirts. Recognising that the sponsorship has been secured at short notice the clubs said “we will work closely together in the coming weeks to provide the best possible solution for those fans who wish to show their support to the team with updated replica shirts.”

Welcoming the deal, Southampton chief commercial officer, David Thomas, said: “Sportsbet.io have redefined the online betting space by combining cutting-edge technology with cryptocurrency expertise and a passion for offering its players with the ultimate fun, fast and fair gaming experience. They are fully committed to providing a safe place where people can enjoy their games responsibly, and have a world-class social responsibility team in place. The club will work with Sportsbet.io and our local community to promote this important social responsibility message over the course of the upcoming year.”

It is the first Premier League deal for the online bookmaker. CEO of the Coingaming Group, Tim Heath, said: “We …share the club’s desire to disrupt its industry and increase its global reach. We’re proud to be able to contribute to the Saints and support such a prestigious team which has been around for nearly 135 years!”