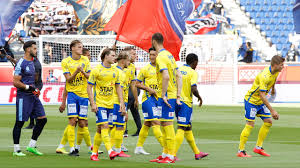 “Our club’s shareholders have reached an agreement to transfer approximately 97% of the shares to Bolt Football Holdings,” Waasland-Beveren said in a press statement.

The American group is led by David Blitzer, Jahm Najafi and Jeff Moorad and enjoys a portfolio that spans stakes in Premier League club Crystal Palace, NBA teams Philadelphia 76ers, and the Phoenix Suns and the New Jersey Devils in the National Hockey League, among others.

The club’s financial director Olivier Swolfs said: “After months of preparatory talks, it is time to land. We wish that the acquirer can make use of the extra mercato opening from September 7th to do where necessary in our team. We have thoroughly scrutinized all the slopes. It was important to find strong financial shoulders in the post-corona era, to be able to enjoy an extensive international network in football, based on proven sporting experience and know-how.”

Beveren recorded a marginal profit of €238,000 in the 2018/19 financial year, making it one of just five pro clubs to enjoy a positive balance sheet. No figure was given for the sale to Bolt.

Last season, Beveren avoided the drop via the legal rather than playing route. When the Belgian league decided to cancel the season, Club Brugge were crowned champions and Beveren were relegated. But the club fought that decision in court and for the 2020/2021 season the Belgian top flight was expanded to 18 clubs to include Beveren and both OH Leuven and Beerschot from the second division.

At the start of the new season, the club however are languishing once again near the bottom of the table with just three points from five matches.