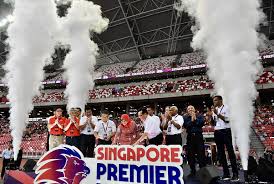 October 12 – The Singapore Premier League (SPL) will resume behind closed doors on October 17, local authorities announced after coronavirus tests for all 223 players came back negative and the overall decline of the virus in the country.

“It’s been a long off-season but the players (even the coaches and match officials too!) are raring to hear the whistle blow once more,” wrote minister for culture, community and youth Edwin Tong on Facebook.

“Glad to hear that the Covid-19 swab test results came back negative for all 223 players and match officials. Coaches and team officials will be masked up during games, alongside other safe management measures. Only the 22 players and 4 match referees on the field can be unmasked.”

Following the announcement, the Football Association of Singapore (FAS) released the fixtures list. Defending champions Brunei DPMM, who are based in Bandar Seri Begawan, were given the option of playing their matches in Singapore.

FAS president Lim Kia Tong said: “The FAS will ensure that all the necessary Covid-19 safe protocols are strictly adhered to, to ensure the smooth restart of the league and hopes it will pave the way for more local sports leagues and events to resume.”

Tanjong Pagar and Albirex Niigata were the last two SPL teams involved in a league game back in March before the competition shut down due to the Covid-19 crisis. Local clubs returned to training in groups of five on June 20 before full practice resumed at the end of August. The SPL is hoping to wrap up the season before the end of the year with Tampines currently leading the table and the last round of fixtures scheduled for the middle of December.

Singapore has been one of the most successful countries in the world in combatting and containing the coronavirus with just 57,880 confirmed cases and 27 deaths.