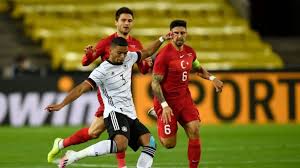 October 13 – Germany will host Switzerland in the Nations League on Tuesday behind closed doors in Cologne because of rising coronavirus numbers.

When Germany played Turkey at Cologne’s RheinEnergie Stadium last week, 300 fans were allowed to attend but a rise in infections in the region have meant the Nations League fixture will be behind closed doors.

The German FA (DFB) announced the news on Monday after consultation with the state authorities of North Rhine-Westphalia.

Against Switzerland, Germany will go in search of their second-ever Nations League win after defeating Ukraine 2-1 in Kiev at the weekend.

On Monday, the Robert Koch Institute showed a 7-day incidence of 66.3 infections per 100,000 for Cologne. Cities that exceed 50 are considered risk areas.

Germany has seen a recent spike in cases nationwide with Munich, Berlin, Frankfurt and Stuttgart among the major cities to pass the 50 threshold, prompting authorities to tighten rules.